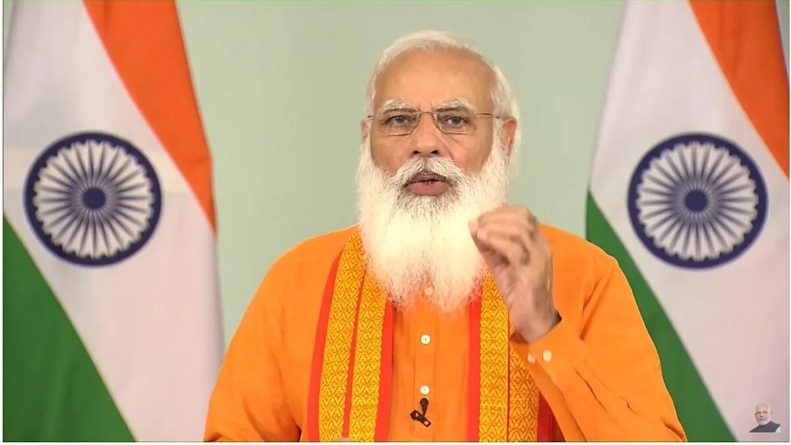 YOGA is a ray of hope and source of strength in the fight against COVID, Prime Minister Narendra Modi said on Monday as tens of thousands of people across the globe touched their toes, stretched towards the skies and breathed in and out mindfully to mark the seventh International Day of Yoga. From mountains to beaches and town squares to neighbourhood parks, and in homes in distant corners of the world and country, people spread out their mats to perform ‘asanas’ and ‘pranayama’ breathing exercises, some as part of their daily fitness routine and others to take part in the celebration of the ancient Indian wellness discipline. Linking the practice of yoga to the battle against the pandemic, Modi announced the ‘M-Yoga’ application in collaboration with the World Health Organisation. The application will have many videos of yoga training based on ‘common yoga protocol’ available in different languages.

Terming it a great example of the fusion of modern technology and ancient science, the Prime Minister also expressed the hope that the M-Yoga app will help in spreading yoga the world over and contribute to the efforts of ‘One World, One Health’. Addressing a yoga day programme, the Prime Minister said there were several instances of doctors and nurses conducting yoga sessions in hospitals and experts stressing the importance of yogic breathing exercises in strengthening the respiratory system. “At a time when the whole world is fighting the coronavirus pandemic, yoga remains a ray of hope,” Modi said. In the last one-and-a-half years, lakhs of new yoga practitioners were added in every corner of the world, Modi said. “When the unseen coronavirus knocked on the doors of the world, no country was prepared for it in terms of resources, capability and mental toughness. We all have seen that in such difficult times, yoga has become a great source of inner strength,” he said. Yoga, Modi added, tells us that so many problems might be out there, but we have infinite solutions within ourselves. “At times, the lives of people exist in silos. These divisions reflect in the overall personality as well.

The shift from silos to union is yoga. A proven way to experience a realisation of oneness is yoga,” he asserted. Despite the pandemic, this year’s theme for International Yoga Day “Yoga for wellness” has raised the morale of the people. He wished for the health of every country, society and individual, and hoped that “we will be united and will strengthen each other”. Yoga shows us the way from stress to strength and from negativity to creativity, Modi asserted. Many schools now begin their online classes with yogic exercises like ‘pranayama’, he said, adding that this prepares children physically to deal with COVID. Indian missions across the world organised special events to mark the day. At the iconic Times Square in New York, for instance, over 3,000 people assembled to perform ‘asanas’, with social distancing in place, to celebrate the day As the city opened up following the COVID-19 pandemic, people turned out in huge numbers for the event that included yoga, meditation and exercise sessions by renowned yoga practitioners. “While we celebrate yoga in various parts of the world, celebrating yoga here in Times Square is very special, very unique.

More importantly, yoga is a universal idea and universal thought, a universal action. And what better place than Times Square to celebrate a universal thought. This is the crossroads of the world,” India’s Consul General Randhir Jaiswal said in his address. And in Kathmandu, the Indian Embassy organised a special programme virtually as part of its ongoing celebration of [email protected] ‘Azaadi ka Amrit Mahotsav’. The theme of the celebration was ‘Be With Yoga, Be At Home (Ghar Ghar ma Yog)’, encouraging people to practice “yoga for wellness”, the embassy said in a press release. A lecture-cum-demonstration of common yoga protocol was presented at the Swami Vivekanand Culture Centre and was broadcast live on its Facebook page.

The event with a voiceover in Nepali was also aired live on television to take the message of yoga and its benefits to every home in Nepal, the embassy said. The day was celebrated across the expanse that is India. Undeterred by COVID, a group of patients donned PPE suits and performed yoga exercises in the Coimbatore, Tamil Nadu. In icy Ladakh, an ITBP jawan spread out his mat in the snow to do a surya namaskar. And in balmy Goa, Chief Minister Pramod Sawant performed yoga exercises at the Aguada Fort in north Goa.

“Yoga is India’s invaluable gift to the world. It has helped millions of us to deal with COVID crises… Let us all make Yoga an integral part of our daily lives,” Sawant said on Twitter. Other Chief Ministers, including Uttar Pradesh’s Yogi Adityanath, Delhi’s Arvind Kejriwal, Chhattisgarh’s Bhupesh Baghel, Gujarat’s Vijay Rupani and Madhya Pradesh’s Shivraj Singh Chouhan, sent out the same message. Urging people to make yoga part of their daily routine, Kerala’s Pinarayi Vijaan said, “Modern Yoga is not something that needs to be seen in connection with any particular religion or spirituality. It should be seen as a form of healthcare.” The UN had proclaimed June 21 as International Day of Yoga on December 11, 2014. The draft resolution was proposed by India – the proposal was introduced by Modi — and endorsed by 175 member States.