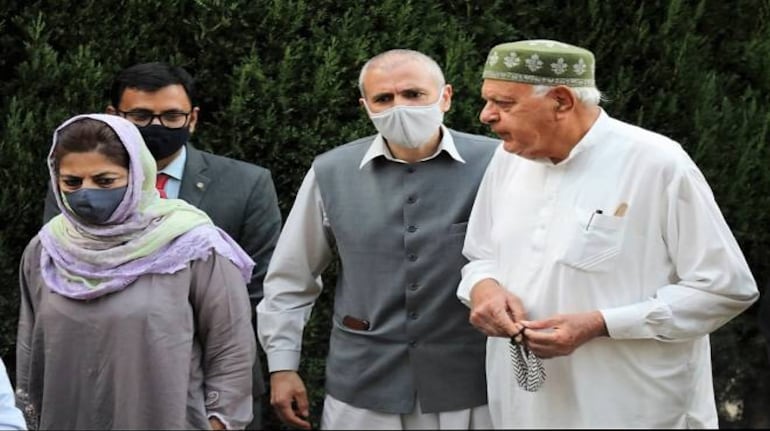 The People’s Alliance for Gupkar Declaration (PAGD), an amalgam of five regional political parties of Jammu and Kashmir, will take a call on the Centre’s offer for talks in its meeting which will be held in Srinagar today.

The National Conference (NC), the Peoples Democratic Party (PDP), the Communist Party of India- Marxist (CPI-M), the Jammu and Kashmir Peoples Movement (JKPM) and the Jammu and Kashmir Awami National Conference (JKANC) will meet at the Gupkar road, Srinagar, residence of PAGD President Dr Farooq Abdullah at 11 am to discuss New Delhi’s invitation for talks.

“The only agenda of the meeting is not whether we should go ahead with talks or not but we will exchange our views. The approach which we should adopt will be discussed,” PAGD spokesperson, Muhammad Yousuf Tarigami told reporters.

READ: Explained | Delimitation in J&K : Here is all you need to know about the exercise

Prime Minister Narendra Modi has invited as many as 14 leaders from J&K, including four former chief ministers of the erstwhile state for a meeting in New Delhi to be held on June 24. One of the four chief ministers is Congresses’ Ghulam Nabi Azad, the Congress, however, is not part of PAGD.

Sources said that the meeting will decide whether to attend the meeting in an individual capacity as a representative of a political party or send two representatives on behalf of PAGD amalgamation. NC leaders Farooq Abdullah and Omar Abdullah are keen to join the meeting while PDP chief Mehbooba Mufti is in two minds, they said.

Dr Farooq Abdullah-led National Conference has called Centre’s move “good change” describing it as a realisation at the Centre that it cannot move forward in J&K without the mainstream political parties.

“There are many harsh ground realities that the Prime Minister should be aware of. We feel that we must express and inform the PM of our pain and suffering. We believe that as political workers we are duty-bound to facilitate movement towards restoration of democracy and empowerment of the people of Jammu and Kashmir,” PC spokesperson Adnan Ashraf Mir said in a statement.

The June 24 meeting is being seen as the first crucial step by the Centre aimed at resuming the political process in Jammu and Kashmir and holding assembly elections ending the Central rule imposed in June 2018.

The PM is expected to urge leaders at the June 24 conclave to cooperate with the Delimitation Commission and set the electoral process moving. Source