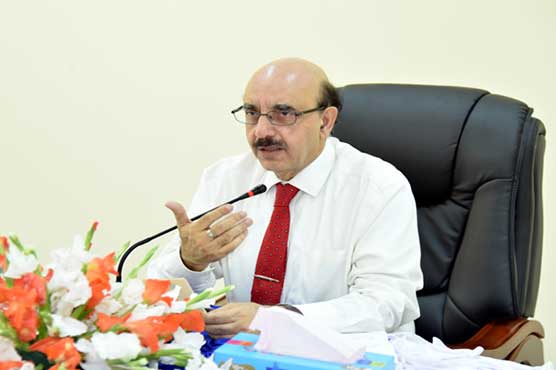 He said Pakistan and the people of Jammu and Kashmir had always supported international diplomacy.

MIRPUR (Dunya News) – Azad Jammu Kashmir (AJK) President Sardar Masood Khan has said that mediation by any third party for the settlement of the Kashmir conflict was not a new phenomenon and several world leaders had been made efforts to defuse tension between Pakistan and India and ensure peace and security in the region.

“Many international leaders have also tried to defuse tensions and bring peace in the region. President Dwight Eisenhower urged both India and Pakistan to resolve major outstanding issues and offered to designate a special envoy for the purpose. President John F. Kennedy picked up the thread during his presidency and in fact, he was the force behind the Bhutto-Swaran Singh talks,” he said.

He expressed these views in his lengthy article titled “Quest for Peace” published in a leading English language journal of Pakistan, AJK President office said on Monday.

The AJK president while touching upon the world efforts to resolve issues in South Asia said that in the 1999-Kargil war, the US President Bill Clinton had intervened and had averted a nuclear clash between the two countries while in 2019, former US President Donald Trump had offered to mediate between Pakistan and India on the Kashmir issue.

However, he went on to say that this was not a sincere offer nor had the Indian prime minister taken it seriously.

Sardar Masood Khan observed that the international community, world leaders, and international organizations had been part of all instruments right from Tashkent Accord and Simla Accord up to Indus Water Treaty. Therefore, it is not correct that Pakistan and India could bilaterally resolve all major issues including Kashmir.

He said that Pakistan and the people of Jammu and Kashmir had always supported international diplomacy and they had also cooperated when the UN Security Council had approved a number of resolutions on Kashmir after deliberations from 1948 to 1957.

“Multilateral diplomacy on Pakistan has been an abiding track on Kashmir, especially in the initial phase of the dispute. The UN Security Council started its deliberations on the issue in January 1948 and by 1957 it had passed a dozen resolutions mandating a plebiscite to ascertain the wishes of the people of Jammu and Kashmir”, Masood stated.

Similarly, four UN mediators include Gen. McNaughton, Josef Korbel, Sir Owen Dixon, and Frank Graham had hectically tried to bridge the gulf between Pakistan and India in order to pave the way for holding a plebiscite in Kashmir, But India always gained time to consolidate its illegal hold on Kashmir.

The president said that the inhabitants of occupied Kashmir had been valiantly resisting the Indian oppression including their systematic ethnic cleansing since 2019, and they were looking towards Pakistan for help.

” Pakistan should seriously conduct a proper performance audit of previous rounds of talks on Kashmir before plunging into a new one. In the past, every incumbent leader in Pakistan had the illusion that he alone had the magic wand to tame or outwit the Indians. Let’s not repeat that mistake”, he asserted.

If talks are held at this juncture, India would come up with a wrong interpretation giving an impression to the Kashmiri people that Pakistan had abandoned the Kashmiri people,” he said adding that it would not be wise to hold talks with India when the latter is very brazenly carrying forward its heinous agenda on the Kashmir issue.