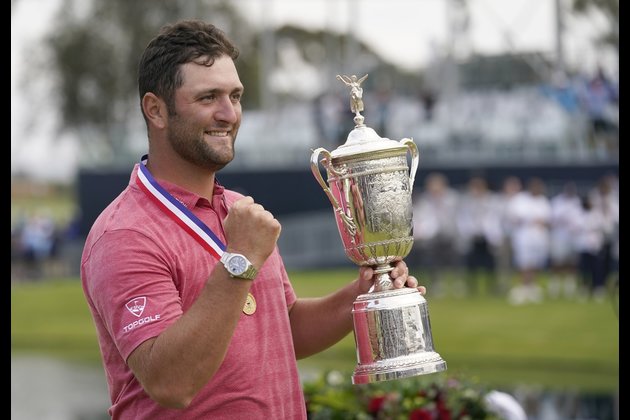 Jon Rahm officially reclaimed the No. 1 spot in the Official World Golf Rankings on Monday, a day after the Spaniard claimed his first major title at the U.S. Open.

Rahm briefly held the spot twice in 2020, after winning the Memorial and after tying for 13th at the PGA Championship. Both stints lasted only one event, however, although Rahm has not been outside of the top three since.

He knocked Dustin Johnson off the No. 1 perch this week after Johnson tied for 19th at Torrey Pines. Johnson had held the top spot since winning The Northern Trust last August, kicking off a dominant run that included winning the Tour Championship and the Masters.

However, Johnson has only one top-10 finish in his past nine starts, while Rahm has been steadily eating away at his lead at the top of the OWGR.

Rahm finally got there with Sunday’s win, which came on the heels of a withdrawal due to COVID-19 while leading the Memorial and a T8 at the PGA Championship. Rahm has eight top-10 finishes in 13 starts in 2021, including the forced WD.

Louis Ooshuizen also climbed six spots to No. 12 following his second consecutive runner-up in a major and the sixth in his career. Harris English, who finished third at the U.S. Open, rose six spots to No. 19.

Just as important for English, he climbed three spots to No. 13 in the United States Ryder Cup rankings. The top six spots will automatically qualify, with captain Steve Stricker then making his six captain’s picks after the Tour Championship in August.

The U.S. rankings were otherwise minimally impacted by the U.S. Open, with Morikawa swapping spots with Thomas for No. 3. There was no other movement within the top 12.

Tiger Woods, who remains sidelined indefinitely while recovering from severe injuries to his legs in a car accident, dropped another 10 spots to No. 152 in the world.