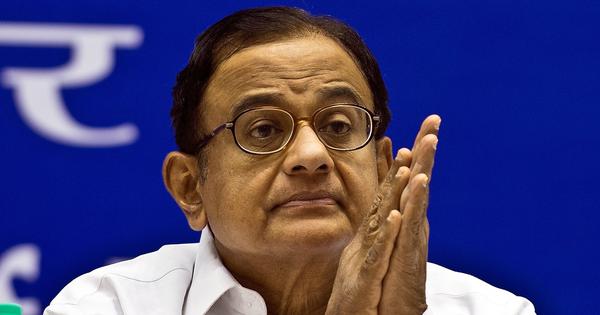 Jammu and Kashmir is not “a piece of real estate”, Congress leader P Chidambaram said on Monday, repeating his party’s demand that the Centre should restore statehood to the Union Territory.

“What was made under the Constitution cannot be unmade by an Act of Parliament misinterpreting and misusing the provisions of the Constitution,” Chidambaram said, referring to the the Centre’s decision to scrap the erstwhile state’s special status in August 2019.

The Congress leader added that the government must respect the wishes of the people of Jammu and Kashmir. He also pointed out that cases related to the matter have been pending for nearly two years in the Supreme Court.

Chidambaram called for the restoration of statehood in the Parliament’s Monsoon Session, which is scheduled to begin in July. “That is the only way to draw the starting line for a political resolution of the Kashmir issue,” he added.

Congress’s renewed demands came ahead of the Centre’s meeting with the region’s political parties on June 24.

The meeting will be held to discuss the process of redrawing Lok Sabha and Assembly constituencies in the Union Territory. It could be the first step towards holding Assembly elections in Jammu and Kashmir.

There had been speculation that the discussions could include the restoration of statehood for Jammua and Kashmir. However, on Sunday, unidentified Union government officials told NDTV that the matter could be discussed but any action would require the Parliament’s sanction.

Meanwhile, on Sunday, members of the People’s Alliance for Gupkar Declaration, a coalition of six regional parties in Jammu and Kashmir, discussed the Centre’s invitation to them for the meeting. Reports suggested that the People’s Alliance for Gupkar Declaration will send two representatives to the meeting. But there is no official confirmation on the matter yet.

The Centre had abrogated Jammu and Kashmir’s special status on August 5, 2019, and split it into two Union Territories – Jammu and Kashmir, and Ladakh. Curfews and internet blockades were imposed in the region after that.

In February, 2021 the Forum for Human Rights in Jammu and Kashmir, an independent body co-chaired by former Supreme Court judge Madan B Lokur said in a report that rights violation continue in the erstwhile state – 18 months after the abrogation of its special status under Article 370.