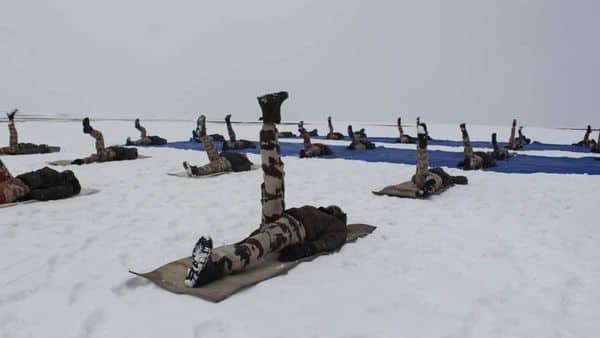 NEW DELHI: From Indian security personnel doing yoga asanas at high altitudes in the Himalayas, and internet users posting pictures of Hollywood icon Marilyn Monroe doing a headstand, to Indian missions across the world organizing virtual and in-person events, the world joined in to celebrate the International Day of Yoga on Monday.

Prominent leaders from neighbouring countries also joined in the celebration. “Our sincere gratitude to @PresRajapaksa, Hon’ble PM, and Madam Shiranthi Rajapaksa for this inspiring glimpse of one of your #yoga sessions. Millions of #yoga enthusiasts will continue to be enthused to see you make Yoga a part of your lives,” said a Twitter post from the Indian High Commission in Sri Lanka, accompanied with a picture of Prime Minister Mahinda Rajapaksa practising yoga.

“Yoga can play a significant role in promoting both physical & mental well-being, especially for those facing social isolation & emotional distress as a result of the covid-19 pandemic,” said a post from the United Nations’ Twitter handle.

Due to the pandemic and restrictions imposed across the world, last year, the International Day of Yoga could not be celebrated. This year, however, with many countries vaccinating the masses and slowly opening up to travel and lifting restrictions on group activities, New Delhi had prepared to mark the day with all Indian diplomatic missions organizing pre-yoga day events.

Prime Minister Narendra Modi had written to heads of states and governments of many countries to ensure that the International Day of Yoga was marked with celebrations and the organisation of special events this year.

“From Japan to Niger to Spain to the US! Indian Missions across the globe celebrate the 7th #InternationalDayOfYoga” said a Twitter post from Indian foreign ministry spokesman, Arindam Bagchi.

India, which has recently surfaced from a brutal second wave of infections, marked the day with several events. Prime minister Modi began the day with an address to the nation in which he stated that yoga was a ray of hope as the world grapples with the covid-19 infections and its after-effects.

“The 7th #InternationalDayOfYoga – The world participates with ever-growing enthusiasm. Feel the energy from its different corners,” said Indian foreign minister S Jaishankar in a Twitter post along with snapshots of countries from Europe to Africa marking the International Day of Yoga.

The celebrations included those by Indian security personnel.

“Indian Navy personnel on mission deployed warships in the true spirit of #YogaDay #YogaforWellness carry out Yoga on the high seas across the Indian Ocean region and beyond,” said a post from the Indian Navy with pictures of service personnel performing asanas on the deck of INS Airavat deployed in Vietnam’s Camranh Bay.