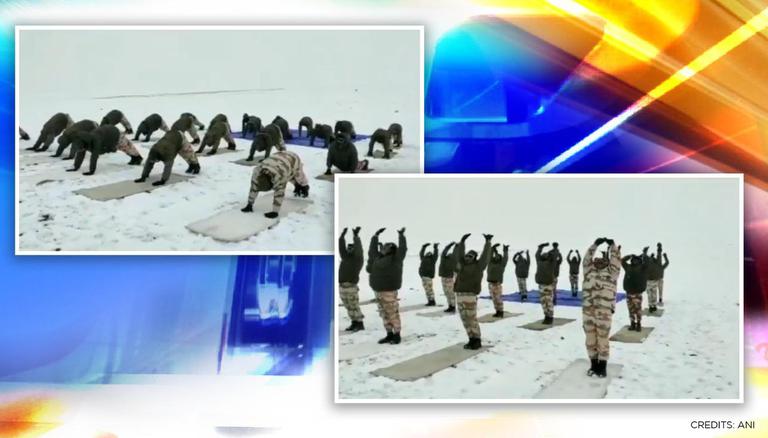 To mark International Yoga Day on June 21, the security personnel of the Indo-Tibetan Police (ITBP) performed yoga at an altitude of 18,000 feet in Ladakh. A clip of the ITBP celebration was posted by the official account of the security force on the microblogging platform on Monday as people across the nation observed the significance of the day. Earlier this morning, Prime Minister Narendra Modi addressed the seventh edition of the Yoga Day lead event to mark the occasion. In the short clip, at least 20 personnel of the Indo-Tibetan Border Police can be seen stretching and performing at least three yoga asanas on yoga mats on the snow-laden ground and freezing cold.

Similar to previous years, the ITBP personnel performed the postures in various different high altitudes at border outposts in Ladakh that range from 13,000 to 18,000 feet to mark International Yoga Day. Since 2015, International Yoga day is being celebrated on June 21 following its inception in the United Nations General Assembly in 2014. Originated in India, Yoga is considered a physical, mental and spiritual practice that is now practised by millions across the globe. PM Modi said on Monday that yoga became a source of inner strength for people and also a medium to transform negativity to creativity amid the COVID-19 pandemic.

Apart from the video of at least 20 ITBP personnel performing yoga in freezing cold, the official account of the border security force also shared an “amazing” video of an ITBP officer performing Surya namaskar alone at 18,000 feet in Ladakh in temperatures below zero. The two minute and 12 second-long video shows the officer bare-chested and following all the asanas without being phased out by the cold even as the viewer can see the ground covered in snow. Internet users praised the ITBP for the “brave” soldiers and offered ‘Pranamas’. Several others expressed their astonishment as the soldier performed the exercise in freezing temperatures to mark International Yoga Day on Monday.