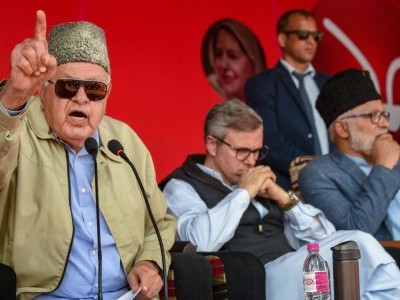 Srinagar: Ahead of Prime Minister Narendra Modi”s meeting with the political parties of Jammu and Kashmir, the National Conference (NC) on Monday said it is good that the Centre has realised that “things will not work” in the Union Territory without mainstream regional players.

Hectic political consultations are on in Jammu and Kashmir within mainstream regional parties including the NC and the Peoples Democratic Party (PDP) over an all-party meeting to be chaired by Prime Minister Modi on June 24.

“We have been saying that nothing has changed on the ground for the last two years. It is good that they have this realisation that things will not work here without the local mainstream. All their huge promises have turned hollow on the ground and nothing has been achieved,” NC provincial president, Kashmir, Nasir Aslam Wani told reporters here.

Wani said the change from “demonising” the mainstream parties in Jammu and Kashmir to inviting them for talks was “good”.

“For that matter, the NC, being the premier political party of the erstwhile state, has that grassroots reach, without its involvement in such kind of dialogues and such kinds of conference, you cannot go ahead,” he said.

“It is always the people”s representatives who can deliver in this trouble-ridden state,” Wani asserted.

Asked if the party felt there was any international pressure on the Centre over Kashmir, the NC leader said, “Whatever be the reason, what is happening is good”.

“Don”t you think something is there? For whatever reason it has happened, it is good. Whether there was any pressure, or there is no pressure or the PM had this realisation and thought that the UT has to see the peaceful times ahead, it is a better realisation and we are hopeful that there is peace and not only internally, but externally as well,” he said.