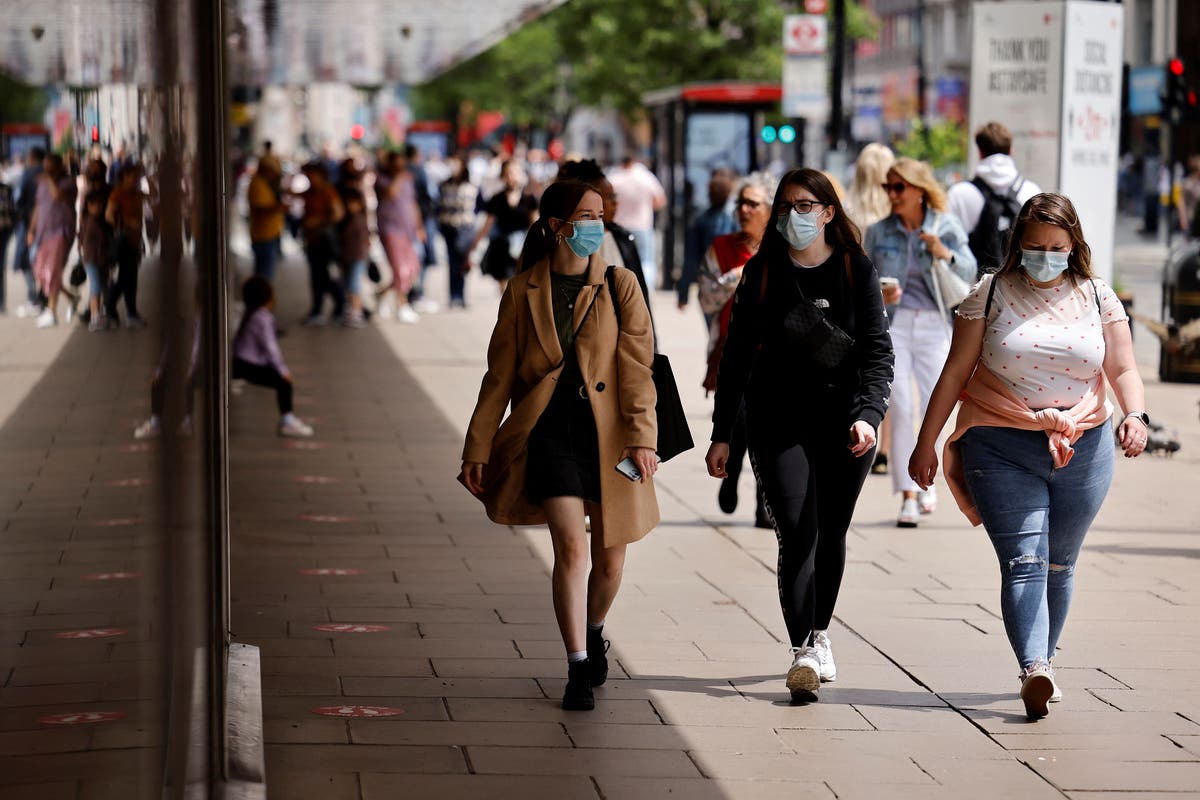 Boris Johnson has warned of a “rough winter” ahead, following Chris Whitty’s warning or either “a further winter surge” of coronavirus, or a spike in cases of flu virus.

It comes after cbinet minister Kwasi Kwarteng said it is “unlikely” the remaining Covid restrictions could be lifted before 19 July. He highlighted that the government would “always err on the side of caution.”

Health secretary Matt Hancock has said that he hopes self-isolation rules will be eventually scrapped and replaced with daily tests for those who have received two doses of a Covid vaccine.

Elsewhere, all adults in India can get a coronavirus vaccine for free starting today. In a policy reversal, prime minister Narendra Modi announced that the government will procure 75 per cent of stocks from manufacturers and would allocate this to states. The other 25 per cent is available to be purchased by private hospitals and sold to those willing to pay for a jab.

The government said as of 9am on Monday,there had been a further 10,633 lab-confirmed Covid-19 cases in the UK.

The government also said a further five people had died within 28 days of testing positive for Covid-19 as of Monday, bringing the UK total to 127,981.

Separate figures published by the Office for National Statistics show there have been 153,000 deaths registered in the UK where Covid-19 was mentioned on the death certificate.

What is the UK’s Covid vaccine booster plan?

Health secretary Matt Hancock has said he will set out a plan for the government’s Covid vaccine ‘booster’ programme in the coming weeks.

But health leaders say planning must start now because it will be logistically difficult for the NHS to run the scheme while they deal with other challenges going into winter.

Canada will start to cautiously lift border restrictions for fully vaccinated citizens as well as other eligible people on 5 July. US and other foreign travellers will however still be excluded, the government said on Monday.

The relaxation of measures will begin from 11:59pm EDT on 5 July (03:59am GMT on 6 July), and will apply to those who have received two doses of a Covid-19 vaccine who will no longer have to spend time in quarantine.

“This is the first phase of our precautionary approach to easing Canada’s border measures. At this time we are not opening up our borders any further,” Intergovernmental Affairs Minister Dominic LeBlanc said in a statement.

Non-essential travel was first banned in Canada in March 2020 as a part of the effort to fight Covid-19, the measures have been extended on a monthly basis ever since.

The restrictions, which exclude trade in goods, are now due to expire on 21 July 2021.

The Canadian government said that it would “continue to consider further targeted measures at the borders and when to lift or adjust them” but did not give precise details.

A senior Labour MP has made a stinging attack on the government’s international travel restrictions after returning from a trip to Europe.

Ben Bradshaw, the former cabinet minister who represents Exeter, launched a Twitter tirade against Boris Johnson as well as the transport secretary, Grant Shapps and the health secretary, Matt Hancock.

Mr Bradshaw wrote: “Returned from a European country with Covid-19 rates one-fifth of ours on Monday. No new variants in that country. Am double-jabbed.”

Period changes post-vaccine could be due to ‘chance’

Changes to some womens’ period patterns after they received a Covid-19 jab may be due to “chance,” said leading gynaecologists.

Experts at the Royal College of Obstetricians and Gynaecologists (RCOG) said that a number of women will experience a temporary change to their periods in their lifetime, so for some women the change may by chance occur around the time that they receive a coronavirus vaccine.

However, RCOG said that anecdotally some women have reported heavier periods after receiving the vaccine. It said that it would support “more data collection in this area to understand why this might be the case.”

The news comes after data suggested that a total of almost 4,000 women had reported changes in their periods after they received a vaccine.

The Sunday Times reported that the Medicines & Healthcare products Regulatory Agency (MHRA) had recorded 2,734 reports after women had received the AstraZeneca vaccine, 1,158 related to the Pfizer jab, and 66 linked to the Moderna vaccine up to 17 May.

The most commonly reported issue was heavier-than-usual bleeding.

Dr Pat O’Brien, vice president for membership at the Royal College of Obstetricians and Gynaecologists, said: “It’s important to remember these side effects are mild and should not deter women from having the vaccine when they are called.

“Many women will experience a temporary change in their periods from time to time during their lives. And right now, many women in their 20s and 30s are having the Covid vaccine.

“So it seems inevitable that in some women these two events will coincide by chance.

“If, however, these changes persist, or you have any new vaginal bleeding after the menopause, you should see your doctor.

“We also want to stress that these perceived changes in menstrual cycle after having the Covid-19 vaccine should not be confused with an impact on fertility and the ability to have children. There is no evidence to suggest that Covid-19 vaccines will affect fertility.”

India’s border police personnel performed yoga at an altitude of 15,000 feet as part of the seventh international Yoga Day celebrations dampened by the Covid-19 pandemic.

The Indo-Tibetan Border Police (ITBP) were seen practicing yoga by the Pangong Tso lake in Ladakh. Its personnel from the Arunachal Pradesh Animal Training School in Lohitpur also performed yoga with horses, according to reports.

Portuguese authorities have said they will accelerate Covid vaccinations and increase testing as the Delta Covid variant continues to spread in the country.

Only just over 25 per cent of Portugal’s population has been fully vaccinated, the majority of whom are the older and more vulnerable.

A recent spike in cases around the Lisbon area has led authorities to speed up the vaccination campaign, especially for young people.

Those aged 35-39 can start booking their vaccination appointment on Monday. Next month, those aged 20-29 will be able to schedule their appointment. An additional vaccination centre will also be opened in Lisbon to help cope with demand.

The number of people who are testing positive for Covid every 24 hours has returned to levels last seen in late February, when the country was still under lockdown. Now however, much of the country is back to normal life with many restrictions lifted.

A weekend travel plan was put in place around Lisbon’s metropolitan area last Friday, in an attempt to prevent people from leaving or entering the region, but the Portuguese Society for Health Management (SPGS) said more measures were urgently needed.

“The control of Lisbon’s metropolitan area must be more restricted and prolonged to try to avoid the spread of the virus as much as possible,” it said.

The UK air travel industry on Monday called for the UK to remove Covid testing and isolation for fully vaccinated travellers as has been happening in the European Union.

“Given the incredible efficacy of vaccines and their critical role in easing domestic restrictions, we believe that the framework can safely be adjusted to provide a pathway for vaccinated people to travel without restriction, alongside steps to reduce restrictions for green and amber categories, making them more proportionate for travellers,” the group said.

The UK’s Prime Minister Boris Johnson warned on Monday that holidaymakers would face hassle and delays this year if they decided to take a trip abroad. He also highlighted how the priority would be to keep the country safe from coronavirus.

The letter cited how vaccines have been confirmed to be more than 90 per cent effective against hospitalisation from the fast-growing Delta variant of Covid. The group suggested that this should be taken into account when Britain’s traffic light system for travel is reviewed, on 28 June.

“This effectiveness has been recognised by Europe, which is now opening its travel and leisure markets by introducing waivers from testing and isolation requirements for fully vaccinated persons, including arrivals from major markets such as the United States,” it said.

“Today 32 countries exempt travellers from quarantine and 27 from testing if fully vaccinated. The failure to adopt a similar approach risks the UK falling further behind the EU’s reopening of international travel, including the critical trans-Atlantic market.”

Boris Johnson fails to deny plans to cut back on pensions

Boris Johnson has failed to deny that the government is considering dropping the pensions triple-lock to help pay for the recovery from Covid.

The prime minister was speaking after reports that chancellor Rishi Sunak is considering suspending the measure – under which state pensions rise in line with  the highest of prices, average wages or 2.5 per cent – for a year in order to avoid a bumper hike as pay soars in the wake of the pandemic.

And reports today suggested the Treasury are considering cutting the pensions lifetime allowance or tax reliefs or introducing new taxation on employer contributions to bring down the ever-mounting bill.

Andrew Woodcock has more below:

Scotland has recorded no new coronavirus deaths and 1,250 new cases in the past 24 hours, according to the latest government data, meaning the country’s official death toll remains at 7,692.

The daily test positivity rate was 7.2 per cent, up from 5.8 per cent the previous day, according to figures published by the Scottish government on Monday.

Public Health Scotland said it is aware of a data flow issue in NHS Grampian between 18 and 21 June, resulting in a lower number of cases reported than otherwise expected, however these are expected to be included in Tuesday’s figures.

There were 158 people in hospital on Sunday with recently confirmed Covid-19, and 14 people in intensive care, the data showed.