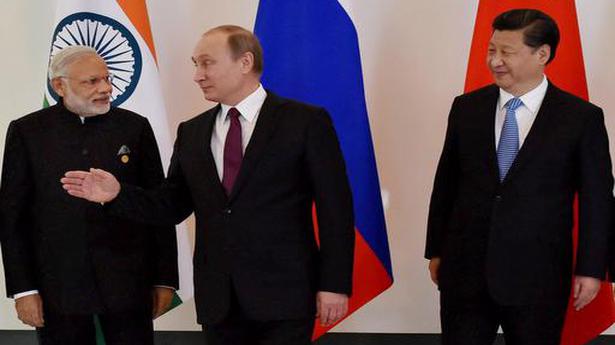 Russian President Vladimir Putin has recently asserted that both the Indian Prime Minister, Narendra Modi, and the Chinese President, Xi Jinping, are “responsible” enough to solve issues between their countries, while underlining the need to debar any “extra-regional power” to interfere in the process. The implications of Mr. Putin’s advice for India are numerous and far-reaching as Moscow expects New Delhi to ignominiously give up all efforts to reverse Beijing’s encroachment strategies. The Russians may have their reasons to remain blind to China’s growing aggressiveness, but the Indians have learned to expect at Chinese hands an unremitting effort to undermine India’s global position — to destroy their confidence in themselves and the confidence of others in them — and to reduce India to a state of isolation and impotence in global affairs.

Mr. Putin’s remarks can only be seen as reinforcing China’s claim that the Quadrilateral or Quad (comprising India, the United States, Japan and Australia) is aimed at containing Beijing’s influence in the Indo-Pacific region. In fact, Mr. Putin’s assertion is the logical extension of views expressed by Russia’s Ambassador to India, Nikolay Kudashev. Sometime ago, he had advised New Delhi to take a “larger look at Chinese foreign policies”, while describing the Indo-Pacific strategy as an effort to revive the Cold War mentality. Russia’s Foreign Minister, Sergey Lavrov, has frequently, and quite acerbically, lashed out at the Quad.

Notwithstanding the cataclysmic changes in the global and regional politico-security environment, India has been able to maintain amicable ties with Russia. Yet, Russia’s continued criticism of the Indo-Pacific and the Quad give ample evidence of the divergent perspectives of New Delhi and Russia on how to deal with China’s rise to global prominence. Russia has rejected the Indo-Pacific construct in favour of the Asia-Pacific on the ground that the first is primarily an American initiative designed to contain both China and Russia.

Obviously, India thinks otherwise since Russia’s simplistic advice is not sagacious enough to solve its China problem. India’s External Affairs Minister, S. Jaishankar, in a virtual discussion with his Australian and French counterparts, had recently asserted that no country can have a veto on India’s participation in the Quad (https://bit.ly/3cXDDaV). This assertion was an indirect counterpoise to what Mr. Lavrov had termed the Quad — as “Asian NATO”. In an unmistakable indication of India’s attempt to reimagine a new geostrategic maritime role for itself, Mr. Jaishankar had further observed that incorporation of the Indo-Pacific concept in Indian diplomacy means that India can no longer be confined between the Malacca Strait and Gulf of Aden.

Though the recent diplomatic romance between Russia and Pakistan has generated some unease in India, it is Russia’s uncritical advocacy of China’s global vision that seems to have left New Delhi overly confounded. For many policymakers and people in our country, the Russian attitude toward China’s growing power and influence will be the touchstone of Russia’s relations with India. While the Sino-Indian relationship has experienced a sharp downward trend since the Galwan clashes in June 2020, New Delhi has become particularly concerned with Moscow downplaying China’s display of coercive military pressure against India. With the catastrophic rise of populist nationalism amidst the bankruptcy of globalisation, the resolution of the Sino-Indian boundary dispute appears a hopeless dream in the absence of a miracle. India is confronted in Ladakh with a situation far uglier and more recalcitrant than is generally recognised.

It need not be necessary to remind us again that the decade following the disintegration of the Union of Soviet Socialist Republics (USSR) was a period of great turbulence in global politics. A bewildered India soon realised Russia was much weaker than the erstwhile USSR and incapable of helping New Delhi balance potential threats from Beijing. This does not mean that India completely abandoned external balancing strategies; it began to diversify its sources of external balancing. On the other hand, Russia began to cast Moscow as the leader of a supposed trilateral grouping of Russia-India-China against a U.S.-led unipolar world.

Leaving behind the bitterness and mistrust between Moscow and Beijing during the Cold War, Russia became an early proponent of the ‘strategic triangle’ to bring together the three major powers. Aware of the emerging international system as an expression of western expansion, India’s fear of the unipolar moment too made it easier for New Delhi to become part of this initiative. But China’s dismissive attitude toward Indian capabilities, coupled with an emerging China-Pakistan nexus, prevented the success of this trilateral. India, instead, invested its diplomatic energies in rapprochement with the United States.

Unlike Russia, which tried to build an alternative international economic architecture, India decided to get integrated in the economic order it once denounced. Economic liberalisation also allowed New Delhi to buy sophisticated weapons from a wider global market that included suppliers such as Israel and France. Both were keen to sell weapons technology to India, and this also boosted New Delhi’s bargaining capacity with Moscow. As the logic of intensive engagement with the West was effectively established, strategic partnership with the U.S. was a logical corollary.

India’s cooperation with the U.S. has strengthened still further, in part against the perceived terrorism threat, but also in light of China’s growing assertiveness whose undesirable impacts are now being felt across the world. However, Russia’s ability to influence the India-China relationship has become doubtful. India has been searching for other major powers to balance against China as it does not have the sufficient means for hard balancing. Adding options to its statecraft toolbox, India has deepened its ties with Japan and Australia in a way that is close to soft balancing. Nevertheless, among all of India’s balancing efforts, the stupendous growth in ties with the U.S. has been the greatest source of concern for China which views the India-U.S. rapprochement as containment.

While India needs Russia’s partnership for its defence needs, New Delhi cannot endorse the Russian perspective on the Indo-Pacific and the Quad. For New Delhi, it would be self-defeating to accept that the Indo-Pacific is an American construct. With the first-ever summit of the four leaders in the ‘Quadrilateral framework’ in March this year, the Quad is being formalised into a functional strategic alignment.

The real ‘strategic triangle’ in the maritime domain will be that between New Delhi, Washington and Beijing. While other powers such as France, Australia, Japan and Russia will have an impact on the emerging maritime structures of the Indo-Pacific region, it is the triangular dynamic between India, China and the U.S. that is going to be the most consequential. Russia is yet to realise that it will gain immensely from the multilateralism that the Indo-Pacific seeks to promote, and being China’s junior partner only undermines Moscow’s great-power ambitions. But the Putin regime is making things unnecessarily hard for Russia as well as for India; and it is clear that those responsible for Russian policy have arrived at a flawed assessment of the current situation. As the Kremlin’s policymakers are obsessively preoccupied with Russia’s ‘status’ rivalry with the U.S., Russia’s view of India-China relations seems understandable. But there is an inherent danger in permitting it to harden into a permanent attitude as an increasingly pro-Beijing Russia might adopt more aggressive blocking of India’s policy agendas. That is why India is particularly interested in a normalisation of relations between Washington and Moscow as it will help it steer ties among the great powers. and also diminish Moscow’s propensity to closely coordinate its South Asian policies with Beijing.

There is no doubt that shared identities and beliefs in the principle of non-alignment, painful memories of colonial subjugation, opposition to great-power hegemony, and strong beliefs in sovereignty and strategic autonomy have been the key influencers in shaping India’s and China’s engagement with each other as well as the western world. But this has begun to change as Beijing is asserting its hegemony over Asia. In such circumstances, multilateral forums such as the Russia-India-China (RIC) grouping and BRICS (Brazil, Russia, India, China and South Africa) have little practical value for Indian diplomacy. Without China’s reciprocity, options before India are limited. India’s concessions, whatever their form, must meet with some form of positive response from China. The response cannot be just symbolic or rhetorical. The absence of any material evidence of reciprocity is bound to doom an attempt at Sino-Indian rapprochement.

Beijing seems to be acting as though it is immune not only to the strategic consequences for its actions but also to all the conventional rules of international politics. China is undoubtedly the most powerful actor in its neighbourhood but it cannot simply have its way in shaping Asia’s new geopolitics. Beijing’s policies will still be constrained and altered in fundamental ways by India which cannot be expected to adopt a hopeless stance of remaining peripheral in its own strategic backyard.

Vinay Kaura is Assistant Professor in the Department of International Affairs and Security Studies, Sardar Patel University of Police, Security and Criminal Justice, Jodhpur, Rajasthan. He is also a Non-resident Scholar at the Middle East Institute, Washington DC