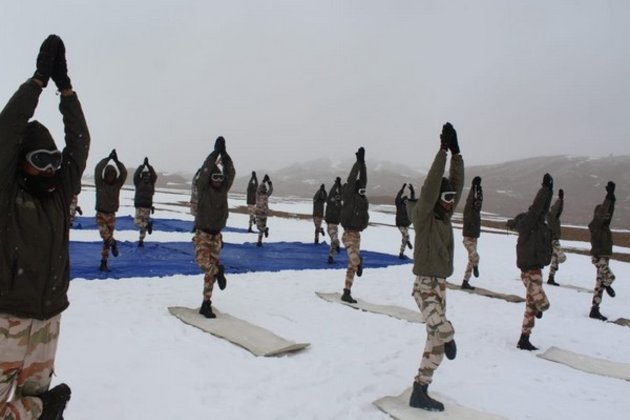 New Delhi [India], June 21 (ANI): As the country observes the seventh edition of the International Day of Yoga on Monday, personnel of the Indo-Tibetan Border Police (ITBP) also performed Yoga on the occasion.

Marking the occasion, the Indo-Tibetan Border Police (ITBP) personnel, deployed at the India-China border in Ladakh performed Yoga at an altitude of 18,000 feet at the snow-covered mountain.

Similarly, the ITBP personnel perform Yoga at an altitude of 15,000 ft near a Border Out Post in Ladakh.

This year, the theme of the occasion is ‘Yoga For Wellness’, and will focus on practicing Yoga for physical and mental well-being.

Since 2014, the occasion has been observed in mass gatherings in different parts of the country.

Last year and this year, however, the lead event has been presented in a televised programme due to the COVID-19 pandemic.

The observation of the International Day of Yoga is a global activity and the preparatory activities normally start 3-4 months prior to June 21. Millions of people are introduced to Yoga in the spirit of a mass movement as part of IDY observation every year. (ANI)