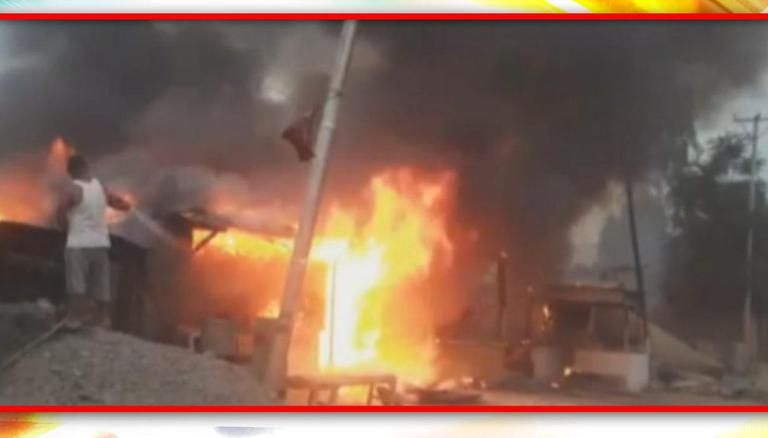 A massive fire engulfed the Ramban district of Jammu and Kashmir on Monday, June 21 morning due to which almost 4 shops were gutted in the fire. No loss of life has been reported in the incident so far. The incident is reported early morning when the locals identified that the flames are coming out from the Ramban area. Soon they called the police and civil administration, which along with the firefighters swung to the action to douse the fire.

Fire breaks out in J&K

As per the recent update, four shops have been gutted into the fire. This fire was in the backdrop of the hilly area and the shops that were situated nearby gutted into it. The firefighting operations are underway and the cause of the fire is yet to be ascertained. Civil administration and police are looking into the matter.

In a similar incident on Saturday, June 19, around 4.45 am, a fire in Poonch’s Mandi district broke out in a business near the Loaran bus stop, engulfing surrounding establishments. A big fire in Jammu and Kashmir’s Poonch district destroyed at least nine shops. Firefighters who hurried to the scene were able to extinguish the blaze after several hours of desperate attempts, according to officials. They claimed nine shops were damaged, and the cause of the fire is being investigated. Officials mentioned a parked bus and dozens of tyres were also burned in a fire at a J&K Road Transport Corporation (JKRTC) yard on the same day. The other incident occurred around 8.30 a.m. at a JKRTC tyre puncture repair factory in Transport Nagar in Jammu’s Narwal region, according to officials. Firefighters and emergency responders extinguished the flames, which they said were sparked by an electrical short-circuit.

A major fire ravaged the Noorbagh area of Baramulla in Jammu and Kashmir earlier this month, destroying over 20 homes. The Indian Army forces had reached the location immediately to put out the fire. Officials said the fire started when multiple gas cylinders exploded, and it quickly spread to surrounding homes. The Indian Army had said in a statement, “Army responded to an incident of fire in Noorbagh, Baramulla in Jammu and Kashmir last night & brought it under control by 2 am. At least six people were injured in the fire. Total 170-200 are people affected.”