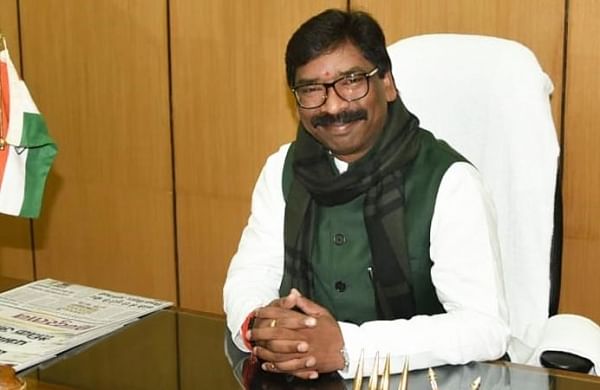 RANCHI: Claiming that migrant labourers of Jharkhand working in high-altitude defence projects are exploited by the Border Roads Organisation (BRO), Chief Minister Hemant Soren said that he will take up the matter with Defence Minister Rajnath Singh, as the situation has not changed despite repeated communications.

The chief minister demanded ‘martyr’ status for the labourers who die laying infrastructure for the armed forces in inhospitable terrains, and claimed that labourers return to the state with bitter memories and do not want to work again for the BRO because of the undignified treatment they get.

In an interview to PTI, Soren said that once the state gets over the COVID-19 crisis, he will personally hold meetings with chief ministers and administrators of various states and Union territories such as Uttarakhand, Himachal Pradesh, Jammu & Kashmir and Ladakh and pitch for a robust mechanism to check workers’ exploitation.

The BRO, however, denied the accusations of the chief minister and claimed that there are a number of labourers who are working for the organisation for a decade.

“In April, I personally received bodies of 18 of our workers killed in an avalanche in Sumna, near the Indo-China border in Uttarakhand’s Chamoli district. All the victims were employed by the BRO but their families did not receive proper compensation. The state government brought the bodies with its own resources. This hurts me and pains me,” Soren said.

The chief minister said that a few days ago, he heard Rajnath Singh praising the BRO for constructing roads in tough terrains, but “it ripped my heart” when he did not utter a word for those who actually lay such infrastructure there.

The Jharkhand government has written a number of letters to the BRO accusing it of “gross violation” of Inter- State Migrant Workmen Act, framed to protect workers whose services are requisitioned outside their home states, by involving middlemen and touts to hire workers.

Soren said that there are umpteen instances where he received migrant workers’ bodies on the state’s expenses with proper compensation to the kith and kin still pending.

“I am aghast at these. I will take up the matter with Defence Minister Rajnath Singh,” the chief minister said.

“Are soldiers facing enemy bullets the only ones who should get the martyr status and not our brave migrant workers? Not a word for them ever. They get exploited by the BRO in high altitude, uncongenial climatic and extremely harsh conditions. This is a gross injustice,” he said.

However, the ministries of defence and home have submitted before the Central Information Commission in December 2017 that there is no term as “martyr” or “shaheed” in the Army or the police and instead, a soldier or a policeman killed in action is called a “battle casualty” or “operations casualty” respectively.

Soren said, “the workers are taken through middlemen and subjected to undignified treatment without proper compensation. This is the reason once a migrant worker comes back alive, he never wants to go back.”

The JMM-headed state government has written to the BRO on the issues.

Jharkhand workers were killed in a flash flood in Uttarakhand, in cloud burst in Jammu and Kashmir and in cold conditions in Ladakh, he said adding: “Despite flagging such instances, policies to protect the migrant labourers are not being implemented.”

Soren said that despite all these, keeping the national interest in mind, he had flagged off a special train with 1,648 migrant labourers to work in BRO projects in Leh- Ladakh and other regions along the India-China border on assurance that 2021 onwards, all steps would be undertaken to protect their interests.

“Hundreds of migrant workers are made to live in pathetic conditions in the hilly and difficult terrains, devoid of proper amenities and wages.

They are reluctant to take up similar jobs on their return to the state.

“Jharkhand, on its part, is augmenting the labour management system by ensuring registration for all workers, and efforts are being made for their gainful employment,” he said.

A senior BRO official said that wages of migrant labourers are fixed liberally and the money is credited to their accounts directly.

“We deal with a large number of migrant workers and take care of their wellbeing in tough terrains. At places, we even run schools for their children. It is wrong to say that the BRO exploits workers. Rather, we have examples where workers continue with us for over a decade. If they fall sick, we provide with them the best medical facilities on par with our jawans,” the official said.

The mission of the BRO, which functions under the Ministry of Defence, is to support the armed forces meet their strategic needs by committed, dedicated and cost-effective development and sustenance of the infrastructure, according to the website of the organisation.

Associate Professor of Indian Institute of Science Education and Research, Dr Anu Sabhlok who has done research on workers in tough terrains, said, ” The workers live in pretty harsh conditions in high altitude using glacial cold waters. If the BRO is hiring, it needs to take care of all these. It could easily be done if a mechanism is worked out.”

Soren said he is the first chief minister in the country to airlift 60 migrant workers stuck in Ladakh in May last year.

After the Covid-19 pandemic struck last year, around 8.50 lakh migrant workers, out of the 10.45 lakh who got themselves registered while being stranded in different parts of the country, had returned to the state between March 2020 and August 2020.

The Supreme Court had on May 24 said that the process of registration of migrant workers is “very slow” and it must be expedited so that benefits of various schemes can be extended to them amid the COVID-19 pandemic.