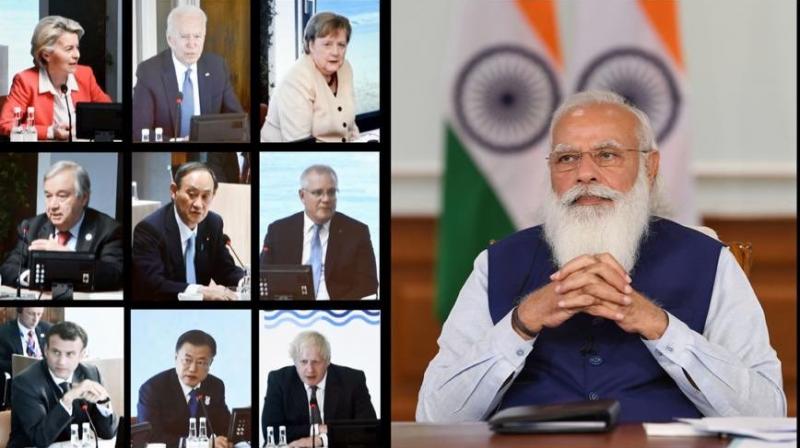 As the Covid-19 pandemic began abating in the United States and Europe as well as India, in-person summitry — on hold for over a year — resumed. The G-7 meeting was held at Carbis Bay in Britain’s Cornwall, following which the US President flew to Geneva for his first meeting with Russian President Vladimir Putin, with a halt in Brussels for talks with Nato. In Israel, long-ruling Prime Minister Benjamin Netanyahu was replaced by a coalition led by Naftali Bennett, while a tightly controlled election in Iran put hardliner Ebrahim Raisi into the presidency. India marked the one-year anniversary of the bloody clash with Chinese PLA soldiers in Ladakh’s Galwan, as Beijing prepared to celebrate the centenary of the Communist Party of China. Some strands of policy flow through all these events and need examination.

The G-7 summit was trying to deal with a world ravaged by Covid-19, the strategic convergence between China and Russia and concerns about the global economy and climate change. A joint communique issued on June 13 outlined in great detail both the challenges and the policy responses. The opening paragraph stresses the determination to beat the pandemic and build a better world. In doing that, the group emphasised the need not to forget their shared values and responsibilities. So, the G-7 was not just a gaggle of major economic powers but also “free open societies and democracies”. Thus, the four non-members invited to the summit — Australia, India, South Korea and South Africa — were seen as espousing those values. Prime Minister Narendra Modi vociferously declared India’s commitment to these values, despite mounting concern within and outside India about the state of India’s democracy.

The G-7 communique captures the main themes under six headings. First, understandably, relates to the current pandemic and ways to end it and be better prepared for any future outbreak. Global health is seen as inter-connected and a “One Health” approach is recommended, covering pandemic prevention, preparedness and seamless links between human and animal health and of both to the environment. This holistic way is a welcome outcome. They also committed to provide two billion vaccine doses through ACTA and COVAX, the two global vaccine programmes.

The second and third themes address the urgent need to reinvigorate the economies after the damage caused by lockdowns and the disruption of supply chains. With this is an emphasis on free and, new hyphenation, fair trade. The World Trade Organisation is sought to be reformed. Behind this is a new consensus between the US and Europe on treating China as a predatory power, utilising state power to gain unfair trade advantages and to poach technology. Also highlighted is the requirement to ameliorate the inequalities caused by wealth accumulation by the top layer as the middle and working classes face tepid growth in incomes. This is the main cause of the rise of fascist forces in the developed world.

It is also recognised that future growth must factor in an increased role of the digital economy and green transformation. The China factor again colours the debate, besides need to regulate and tax big technology firms with a global footprint.

The communique devotes a lot of space to climate change and new commitments to ensure the world moves towards reducing greenhouse gases. To achieve that, power production and transport systems must be de-carbonised. Renewables are advocated, besides recommending the diminishing use of coal, labelled the “single biggest” culprit in global warming. On agriculture and forestry, sustainable production is seen as dependent on conservation consciousness and regeneration of eco-systems. This holds a lesson for India, with the farmers’ agitation still continuing as the government is unable to present a unified model for transitioning to greener and sustainable agriculture.

The G-7 will also seek new partnerships, especially with Africa. The aim is to counter China’s monopolising infrastructure development under the Belt and Road umbrella. The G-7 will also seek a standard setting in new technologies like Artifical Intelligence and a negotiated balance in the cyber world between freedom of speech and privacy concerns on one side and its abuse on the other.

The elephant in the room is clearly China, which celebrates a century of its Communist Party’s existence on July 1. There is some softening of the tone President Xi Jinping has adopted of late, but this may be a tactical move to ensure that the centenary celebrations go off smoothly. On the other hand, some analysts interpret it as a sign of brewing internal dissonance over China getting progressively more isolated as it displays aggressiveness along its continental and maritime periphery.

As India marked one year since the Galwan horror, China is still refusing to withdraw some intrusions to positions of traditional deployment of its troops. Despite the Indian government’s claims to the contrary, the PLA detachments are blocking Indian patrols in Depsang Plains, Gogra and Hot Springs, etc. Recently China sought talks at the local military level. But so far there is no evidence that China will modify its use of the unsettled border to strategically keep India on the tenterhooks. Some analysts feel China wants to keep India tied down in the Himalayas so that it doesn’t divert its resources to the maritime domain, where India has an edge.

President Biden’s summit with President Putin was to try and loosen the growing convergence between China and Russia. It was a smart move to tackle Mr Putin before sitting down to discuss differences with President Xi Jinping. Russia may not be the global rival it was during the Cold War or have an economy that is in the top 10 but it still has a huge nuclear arsenal and sheer geographical size to intervene in European and Asian affairs. Thus, reducing Russia’s handholding with China is necessary for the US to raise the G-7’s leverage against China. The first step towards that was to get the European powers on board as nations like Germany are always worried about their exports to the huge Chinese market.

Looking at the G-7’s priorities, India will have to carefully thread its path through them. Foremost is preparing to face climate change evangelism. Next is how to play along with the “Quad” or other US initiatives without being locked into an intractable anti-China position. Finally, the salience of India’s domestic political discourse may degenerate even more than during the West Bengal election as the Uttar Pradesh Assembly polls approach. This may sit poorly with the pious words used by Prime Minister Narendra Modi during his G-7 engagement.