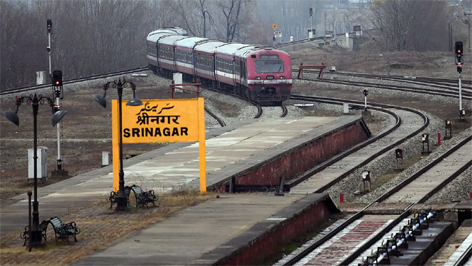 NE DELHI, June 20: All the 15 stations in the Kashmir Valley, including Srinagar, have been integrated with the Wifi network of the Indian Railways, a statement from the ministry said on Sunday.
RailWire Wifi is now available at Baramula, Hamre, Pattan, Mazhom, Budgam, Srinagar, Pampore, Kakapora, Avantipura, Panzgam, Bijbehara, Anantnag, Sadura, Qazigund and Banihal stations of Jammu and Kashmir, it said.
Railway Minister Piyush Goyal said, “Today, on World Wifi Day, I am delighted to announce that Srinagar and 14 stations of the Kashmir Valley have become a part of one the largest integrated public Wifi networks in the world, connecting 6,000 plus stations across the country.”
With this, all the stations of Valley now have public Wifi, he said.
“It is a crucial step for Digital India mission and will go a long way in connecting the unconnected. I convey my appreciation to the team Indian Railways and RailTel, which has worked tirelessly to achieve this remarkable feat,” the minister said.
Initially in the Union Territory, the service was available at the Jammu, Kathua, Budhi, Chhan Arorian, Hira Nagar, Ghagwal, Samba, Vijaypur, Bari Brahman, Jammu Tawi, Bajalta, Sangar, Manwal, Ram Nagar stations, according to the statement. RailTel was entrusted by the Ministry of Railways to provide public Wifi at all the stations, the statement said.
“The vision was to convert the platforms into platforms for digital inclusion. Today, the Wifi network is spread over 6,000 stations across the country and this is one of the largest integrated Wifi networks in the world,” it said .
The railway minister said that Wifi plays a significant role in connecting people, and is bridging the digital divide between rural and urban India at a rapid pace.
“The Indian Railways, in association with its RailTel Corporation of India Ltd, is playing a key role in bringing high speed Wifi to every corner of the country,” Goyal said.
The statement said that Wifi at railway stations will be available to any user who has a smartphone with working mobile connection for KYC considerations. More than 5,000 stations of this public Wifi network are located in rural India with poor connectivity, it said.
Commending the Indian Railways, Union Minister Jitendra Singh said, “Today Wi-Fi is playing an important role in connecting communities and spurring innovative solutions to help bridge the digital divide.”
Owing to the pandemic, the need to be virtually connected is higher than ever, the minister of state in the Prime Minister’s Office said.
“The Indian Railways is playing a significant role in bridging the rural divide through the station Wifi network created by its central public sector unit RailTel. I am very happy to note that 15 stations in the Kashmir Valley in Jammu and Kashmir are now live with are now live with RailWire Wifi,” he said.
“This will be an added amenity for the people of the region and the country. I wish everyone a very Happy World Wifi day,” the minister said
The Indian Railways is working towards transforming stations into digital hubs by providing public Wifi at stations across the country and 6,021 stations are live with RailTel’s RailWire Wifi. (PTI)