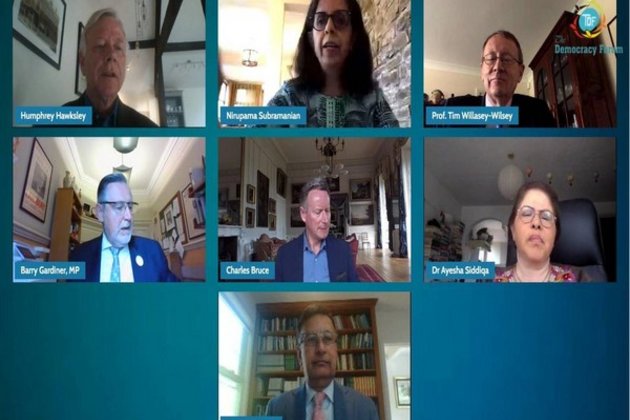 London [UK] June 19 (ANI): A panel of global experts from academia, journalism and diplomacy discussed the historical backdrop and motivations underlying Pakistan’s overtures for peace with India and the role of China in this scenario at a virtual seminar recently.

The event was organised by UK-based The Democracy Forum (TDF).

TDF Chair Lord Bruce spoke of the Chief of Pakistan’s Army Staff General Bajwa, who said in February that Pakistan was committed to the idea of mutual respect and peaceful coexistence with India. Such overtures between India and Pakistan, it emerged, had been ongoing for several months, said Lord Bruce, to pave the way for de-escalating the military standoff that has long characterized Indo-Pak relations.

Although there have been numerous previous attempts at dialogue with India, regional peace and better ties, Lord Bruce said things seemed different this time, as Pakistan’s peace initiatives are starting to reflect more accurately the debilitating cost of its continuing isolation, and Gen. Bajwa was now focused more on economic than military objectives.

Lord Bruce added that our insight into the machinations of Pakistan’s India policy has to be conditioned by an understanding of its obligations to China, given massive Chinese investment in the country, and the scale of Pakistan’s debt to China.

Regarding Gen. Bajwa’s talk of a paradigm shift between the two countries, Siddiqa said that in Pakistan’s military-civil “hybrid regime” – in which the military was in charge of decision making by the civilian government would share some responsibility for reactions and outcomes – the picture becomes fuzzy for observers, who wonder: who is doing what?There is a sense of division within the military on where Pakistan should stand regarding peace with India, said Siddiqa, and what is desired is a “managed true”, where war becomes less of a possibility.

Regarding China’s role in Pakistan, Siddiqa said that Pakistan wants to maintain its relations with both China and the US and, if the Indo-Pacific was a room, Pakistan would like to be standing in the room, not outside. If Pakistan is to become a geopolitical hub, its political institutions need to be repaired. For that, peace is essential but, while the generals understand that, it continues to be difficult for them to visualize it.

Ambassador Hussain Haqqani, Director of South and Central Asia at the Hudson Institute and a former Ambassador of Pakistan to the United States, focused on how China has used Pakistan as a secondary deterrent for India by playing the `friend in need’ card in what he called Pakistan’s “India obsession”.

Ambassador Hussain Haqqani said, “China does not want war between Pakistan and India; it continues to trade with India, and that trade is much greater in volume than Chinese trade with Pakistan. But it likes the idea of Pakistan remaining mired in a national narrative and ideology that considers India to be an existential threat, as this ensures that most of India’s military remains positioned along the long border with Pakistan, and remains engaged in Kashmir”.

“And without this narrative, India would be able to devote more military resources to the rest of Asia, rather than in South Asia”, he added.

Pakistan’s peace overtures to India, said Haqqani, usually come when the country’s leaders feel they need friends other than China, most of whom tend to advise Pakistan to befriend India rather than constantly challenging it, notwithstanding outstanding disputes between the two.

Ironically, he said, China – which continues to encourage hardliners within Pakistan and hence keep the country where it is – has taken advantage of Pakistan’s perception of India as an existential threat without offering Pakistan the security Pakistanis believe they have – for example, the Chinese did not support Pakistan during the Kargil conflict.

Tim Willasey-Wilsey, visiting professor, Department of War Studies, King’s College, London, and a former British diplomat, considered the complex triangular relationship between India, China and Pakistan and how easy it is to assume that the outcome can only be disastrous, given the dangers implicit in Kashmir, Afghanistan, along the Himalayan border, Aksai Chin, Xinjiang, Tibet, the use of terrorism and the presence of nuclear missiles. In a putative new Cold War, the tensions created could be intense, he said.

However, Willasey-Wilsey also addressed the idea that all three countries have real interests in preventing this situation from getting out of hand. “For example, India got a shock when it found itself exposed to China and Pakistan at the same time. Prime Minister Modi still needs China if he is to lift the Indian economy, which is his main aim. For its part, China recognizes the vulnerability of its Himalayan border and the possibility that it could be used (by the West through India) to restabilise its two most vulnerable provinces. And Pakistan, although committed to its all-weather partnership with China, does not wish China to be its only major alliance and does not want to become a vassal state.” (ANI)