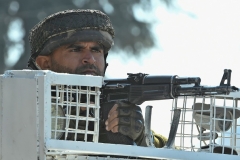 An Indian trooper stands guard near the site of a shootout in Srinagar, Kashmir in February, after unidentified gunmen killed two policemen. (Photo by Tauseef Mustafa / AFP via Getty Images)

(CNSNews.com) – From afar, it is one of the majestic pockets on the planet: pastel, medieval homes dug into the mountain rim, an unraveling maze of greenery cutting through the morning mist, with farmers and artists dotting the wide dusty streets.

But up close Kashmir, a Muslim-majority Himalayan territory divided between Pakistan and India and claimed by both, is an enclave of seething tensions, unresolved for the past seven decades.

Some observers fear that one of the world’s most prolonged conflicts may only worsen as the United States detangles itself from 20 years of war in neighboring Afghanistan.

“Pakistan-sponsored terrorism will likely increase in Kashmir after U.S. troops leave Afghanistan,” said Bill Roggio, a senior fellow at the Foundation for Defense of Democracies (FDD) and editor of FDD’s Long War Journal.

“Pakistan has learned that state sponsorship of terrorism works as a tool of its foreign policy, and the Taliban’s victory emboldens jihadist groups.”

Optimism that a cessation in hostilities in Kashmir had been holding was shattered early Sunday, with at least nine people wounded in a grenade attack by an insurgent allegedly targeting Indian police.

However, the Line of Control dividing Indian- and Pakistani-controlled areas of Kashmir has recorded no truce violation since a ceasefire was declared in late February, following secret talks in Dubai aimed at reducing tensions.

India blames Pakistan for the protracted conflict, accusing its neighbor of giving a free hand to terrorists to attack. In Pakistan’s view, Muslims are subject to mass human rights violations at the hand of Hindu-majority authorities.

The decades since India and Pakistan achieved independence from Britain in 1947, have been defined in the idyllic but disputed territory by protests, terror-style assaults and cross-border shelling and combat involving the two nuclear-armed powers.

Tensions hit a fresh high in August 2019 when Indian Prime Minister Narendra Modi controversially changed the status of the Indian-controlled part of Kashmir, ending the autonomy the area had long enjoyed.

The move infuriated Pakistan, which views Kashmir as the most critical issue in its bulging foreign policy file.

New Delhi says it remains dedicated to fighting militancy, which gained momentum in the late 1980s and elicited a brutal crackdown. While framed as a separatist insurgency, analysts have long asserted that the groups operate with the backing, or at least muted acceptance, of Islamabad.

Pakistan denies links to violent acts,  instead accusing India of abuses such as sexual violence against Kashmiri women and the blinding of hundreds as a result of police using pellet guns as a method of protest control.

Adding to the regional dilemma, the U.S. is now on the hunt for regional intelligence partners as it draws down its forces in Afghanistan.

Given Pakistan’s longstanding collusion with terror groups, many question whether it could be a viable, reliable partner.

According to global risk analyst Dennis Santiago, the Pakistanis are “strategically conflicted in places like Afghanistan.”

‘They play their own game of hill-and-valley power on their land border, making local alliances, sending supplies, and spinning narratives that benefit the interests of the nation of Pakistan,” he said. “These interests that do not align with the interests and objectives of the United States in Afghanistan.  It is a region of miniature proxy wars between second-string interests, none of whom believe that the United States is their answer to salvation.”

“Additionally, the U.S. should be wary of Pakistan, which has been duplicitous in Afghanistan,” he said.

In a bid to win international attention and support, Pakistani diplomats have sought to compare the Kashmir issue with the Palestinian one, but without evident success.

Kashmiri journalist Aditya Raj Kaul says that while “Pakistan has tried to show resistance in Kashmir as indigenous,” over the years, terrorists have attacked ordinary citizens, weakening Islambad’s position.

“Islamabad has hit a dead end even though it has tried to recreate the intifada [Palestinian uprising] model on the streets of Kashmir,” Kaul said.

Longstanding U.S. policy has been that Kashmir is a “bilateral” matter between India and Pakistan, and that it will not take an active intermediary role.

But despite hints of a possible policy shift, State Department spokesman Ned Price in a press briefing earlier this year said there was no change so far to Washington’s hands-off approach.

“The primary reason why the U.S. and international community have largely stayed out of this conflict is because it is so complicated,” said Chris Haynes, associate professor of international relations at the University of New Haven.

“Any further involvement could be seen as outside powers playing favorites, illegitimately inserting themselves in a regional conflict, or providing false hope to Kashmiris that the situation could be resolved, which could further inflame tensions and lead to future violence.”

If terrorism swells, however, it might prove difficult for the U.S. to turn away.

“Some of the most extreme fighters are likely to be repositioned and directed towards India, possibly with Chinese logistical support,” said Cleo Paskal, a non-resident senior fellow at FDD focusing on the Indo-Pacific region. “Beijing and jihadists share as a goal the weakening – if not the destruction – of the Indian state.”