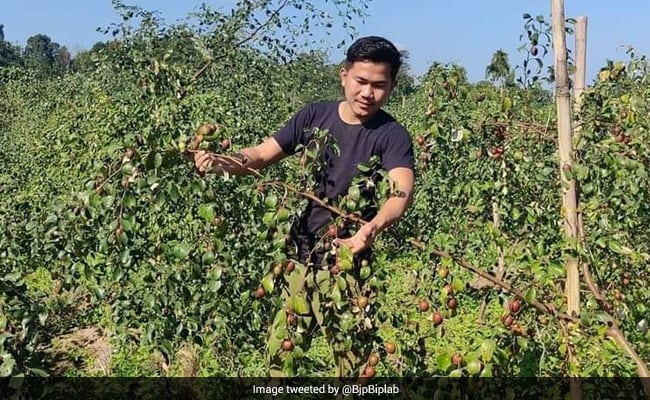 Meet 32-year-old Bikramjit Chakma, who wants to cover the tropical hills of the northeastern state of Tripura with Kashmir’s famed “ber apples”.

As a pilot project, Mr Chakma has cultivated the Kashmiri variety of the fruit on his 1.25 hectare of land and earned a net profit of Rs 3.5 lakh in one season, winning accolades from the chief minister himself.

Mr Chakma, who hails from Pencharthal in Tripura’s North district, said he came to know about cultivation of “ber apples” in neighbouring Bangladesh, and decided to try his luck with the fruit in his state, which has similar climatic conditions.

“I saw on the internet that “ber apples” are cultivated in abundance in Bangladesh with very good yields. So, I went ahead and bought 1,300 saplings from West Bengal at Rs 2.5 lakh and planted those in March last year, which were harvested in January. I earned Rs 6 lakh by selling the produce,” he told PTI over phone.

Mr Chakma said his uncle and two cousins used to cultivate potatoes, radishes and other seasonal crops on the same piece of land, which fetched only about Rs 12,000 per year.

Altogether, 40 quintals of “ber apples” were harvested, of which 12 quintals were sold in the wholesale market and the rest in the open market at an average price of Rs 115-120 per kg, he said.

“We never thought that the sapling I brought would bear so much fruit. With proper care and watering, we hope to harvest close to 80 quintals next year,” he added.

Chief Minister Biplab Kumar Deb has hailed Mr Chakma for his innovative idea that set an example of self-reliance.

“This young man has achieved success by applying a fancy idea in farming with his uncles. He cultivates Kashmiri apple ber trees in 6 Kani areas. Bikramjit is optimistic that the trees will bear double fruit next year.

“I applaud his initiative. His desire to become self-reliant and to achieve success will inspire others in the state as well,” Mr Deb said in a recent Facebook post.

Horticulturists in the state are hopeful that cultivation of “ber apples” would emerge as a means of livelihood for unemployed farmers.

Baharul Islam Majumder, former director of the Horticulture Department, said besides this variety of apple, there are many fruits which can be cultivated in the unused and uplands of Tripura.

“I would request the government to make a long-term plan for horticulture and announce a special package for the growers,” Mr Majumder said.