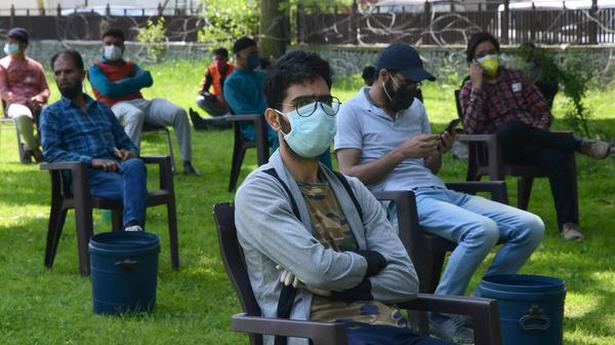 Jammu and Kashmir is witnessing a plateauing of the second wave of COVID-19 infections after 60 days of rising numbers, with both mortality and active positive cases showing a downward trend.

The decreasing trend of active positive cases has come as a relief for the stressed health infrastructure of the Union Territory (UT).

“Since May 20, the number of active cases in the entire Union Territory came down to less than 50,000 and the downward trend has lowered the number of hospital admissions too,” a senior official, overseeing the pandemic trend at the J&K Health department, told The Hindu.

According to the official data, the number of cases, which had crossed the 6,000-mark a day, has remained consistently under 4,000 in the past one week. J&K started seeing a rise in coronavirus cases from March 25 which peaked by May 2. “It’s plateauing now,” the official said.

“J&K reported 480 deaths between May 11-17 but numbers came down to 387 between May 18 and May 24. This shows a weekly downward trend in mortality,” the official said.

Doctors at the Valley’s leading hospitals — including the Shri Maharaja Hari Singh (SMHS) hospital, the Sher-i-Kashmir Institute of Medical Sciences (SKIMS), the Chest Disease Hospital and the Jawahar Lal Nehru Memorial Hospital — confirmed that the number of admissions of COVID-19 patients is less than the patients discharged in the past one week. This had resulted in increasing availability of oxygen-supported beds.

“The situation is getting hopeful now compared to the gloom we witnessed two weeks back. From 15-20 admissions a day, it has come down to five admissions a day. Even the severity of cases reported in hospitals has now come down. The lockdown has paid off positively in arresting the upward graph,” Nasir Shams, a physician at Srinagar”s JLNM Hospital, told The Hindu.

The bed vacancy at the JLNM hospital has increased by 50% in the past one week.

Meanwhile, sources said the government is mulling relaxations to the ‘Corona Curfew’ in a phased manner from May 31 in the UT’s 20 districts.

J&K has been under a lockdown since the last week of April. There are growing voices to address the economic impact of the lockdown.

“A comprehensive business revival package for Kashmir’s horticulturists, agriculturists, traders and business houses is needed. The interest subvention and loan moratorium schemes should be mooted at the present stage to get the crisis-ridden sectors out of the chaos,” Peoples Conference (PC) leader Syed Basharat Bukhari said.