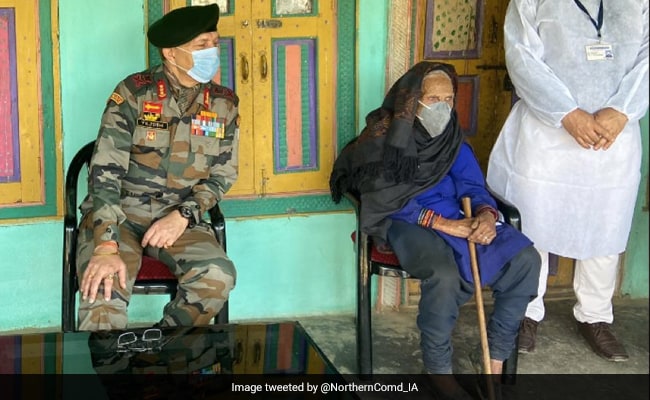 Centenarian Dholi Devi told reporters she took the vaccine and faced no problem at all.

A 120-year-old woman has become an inspiration for people living in rural areas of Jammu and Kashmir’s Udhampur district after she took a lead in her remote hamlet to get vaccinated against COVID-19, prompting Northern Army Commander Lieutenant General Y K Joshi to felicitate the centenarian at her home on Friday.

In an environment where vaccine hesitancy has been witnessed among sections of the public, 120-year-old Dholi Devi got herself the shot on May 17 that has been able to transform the mindset of the local population, an army officer said.

“Dholi Devi represents the voice of hope during the pandemic gloom and the entire village has now voluntarily come forward for inoculation inspired by her,” he said.

Speaking to reporters, Ms Devi said she is 120-years-old and took the vaccination and faced no problem at all.

Her grandson Chaman Lal said, “She got vaccinated at this age. She faced no problem and had no fever. Her appeal to all is to get vaccinated.”

Impressed by her initiative, Lt Gen Joshi, a Kargil War hero, drove to the house of Dholi Devi in Gar Katiyas village of Dudu tehsil in the district, and honoured the senior citizen amid the presence of locals and top army officers.

Army officers said the centenarian has single-handedly inspired an entire village to make the vaccination drive a huge success.

“(Ms) Devi, who is 120-years-old, is a living legend and epitomises good health in a time in which even the young people are struggling to keep their immunity intact,” they said.

The army commander acknowledged the inspirational act of Dholi Devi while felicitating her and sensitised the civilian population about the benefits of COVID vaccination drive, they said.

Mr Joshi also interacted with Devi and the healthcare workers in the village while appreciating them for their selfless service to the people and their dedication in taking the vaccination drive to the remotest areas in the Union territory.

The Indian Army has been taking steps to fight the misinformation regarding the vaccination drive in the UT.

Massive outreach programmes have been launched to empower the people by providing them the right information and equipping them with the knowledge necessary in the fight against the pandemic.