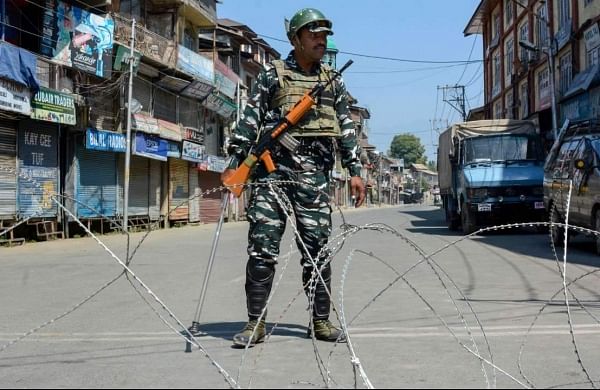 SRINAGAR: The police in Kashmir have sent a clear message that pro-Palestine protests will not be tolerated in the Valley by arresting 22 people, mostly youth, in the last few days.

​The Israeli attack on Gaza, in response to rocket firing by Hamas militants, has angered many in the Kashmir Valley.

On Thursday, youths staged two protests in Srinagar. In one of them at Padshahi Bagh, a graffiti artist Mudasir Gul put up a pro-Palestine graffiti on a bridge that depicts a woman wearing a scarf made of Palestinian flag with tears trickling down from her eye.

The graffiti had the message, “We are Palestine” to express solidarity with the Palestinians.

The next day police launched a crackdown on those who participated in the two protests. As many as 21 people, including the graffiti artist Mudasir Gul, were detained.

“Two protests were held in Srinagar Friday on Palestine issue. They were identified on the basis of videography done during the protests,” the police said. In south Kashmir’s Shopian district, the police arrested cleric Sarjan Barkati for holding a special prayer for Palestinians during Eid.

These arrests send a clear message that police won’t be allowing any kind of dissent or protests in Valley.

A police spokesman said the police is keeping a close watch on those who are attempting to leverage the situation in Palestine to disturb public peace in Kashmir.

“We won’t allow cynical encashment of the public anger to trigger violence in Kashmir’s streets,” he said.