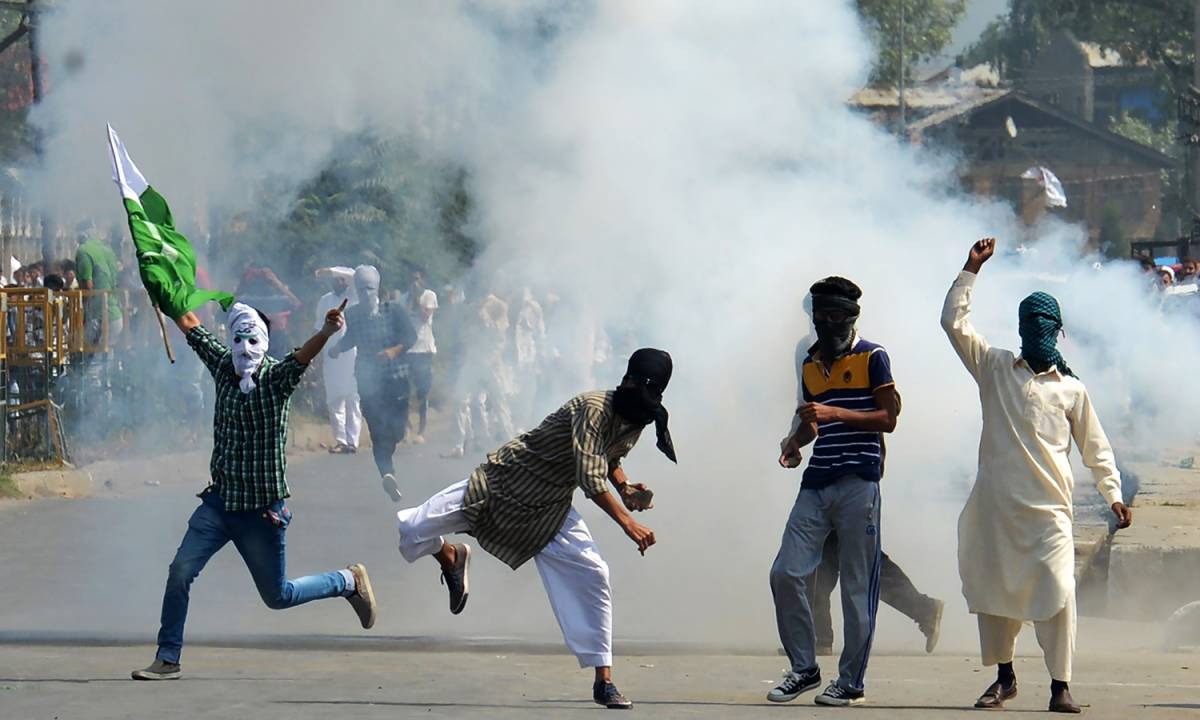 Currently there is much talk about backdoor negotiations between India and Pakistan apparently facilitated by the UAE. There is more than meets the eye, as a miniscule nation like the UAE has limited clout over two nuclear powers. Most likely some backdoor manoeuvrings by a superpower broke the ice between these nations and they were coaxed to at least interact.

Under normal circumstances as a resident of Indian occupied Kashmir (IOK) who has seen protracted suffering by the population there, I should relish the thaw between the two countries and the chance of the parleys helping establish the groundwork needed to resolve the tangled IOK problem.

Like the majority of the Kashmiri diaspora, I am deeply anguished by this news and information that several meetings have already taken place in Dubai, London and Bangkok. Though the authenticity of the news is not indisputable, if true, Pakistan once again is being taken for a ride.

Although, there is very little information about the talks agenda, they are doomed even before they have begun which will be calamitous for the Kashmir cause. This interaction will be nothing but an unmitigated disaster unless initial spadework is performed.

Very simplistically, one fails to understand what is so unique about these negotiations. Similar bilateral summits, with failed outcomes, have been held previously and the current one apparently is not a departure. The primary reason for these unabated failures is lack of sincerity on the Indian side. All along, as regards to Kashmir, India has been disingenuous and its attitude has not undergone any radical change. Any individual thinking otherwise is living in an illusionary world.

A keen observation of Indo-Pak talks in the past decade, shows a pattern. The talks are initiated at the level of mid-officials with the promise of upgradation in the near future. This is followed by bomb blasts or so-called terrorist attacks on Indian soil (Mumbai, Pathankot, Pulwama). Highly efficient Indian agencies who are unable to prevent these attacks lose no time in blaming Pakistan or ISIS, claiming incontrovertible evidence of their involvement.

Indian machinery is well geared up and to a large extent they have successfully distorted the image of Pakistan. India recruited several agencies in Europe and America and presented the Kashmir issue as the outcome of terrorist activities perpetrated at the behest of Pakistan.  Kashmir issue is screaming and screeching for the media campaign that needs to be launched to spread the voice of innocent Kashmiris who are being subjected to kind of atrocities never witnessed before.

Pakistan is put on the defensive and repeated pleas for access to the evidence collected by India is denied. Instead India has the chutzpah to dictate to Pakistan and clamour that the so-called “suspects” be handed over. As expected, Pakistan refuses to do so and there is cessation of parleys for a long time. There is no reason to believe that India will not continue to pursue this strategy of one step forward and two steps backward.

It does not take an in-depth analysis to reach the conclusion that this dilly-dallying is part of India’s game plan. It is aggressively strengthening its grip on IOK. This involves introducing fresh draconian laws daily to further subjugate the people of IOK, bringng in Hindu officials from India who will cooperate in executing their designs and ensuring that demographic changes are accomplished so that the Muslim majority in IOK is transformed into a minority.

Indo-Pak mistrust is so deep bilateralism will never work. It has failed to yield tangible results before and it is puerile to think that the future will be any different. Let us refer to the most important bilateral agreement, the Simla Accord, which was signed in 1972 after the Bangladesh war.

Very often when it comes to the Kashmir issue, India emphatically states that the talks need to be held under its purview. Yet the accord never took off the ground. Let us name any one or two clauses in the agreement which were fulfilled. The accord should be subjected to the dustheap of history. Moreover, the accord was signed between victor (India) and vanquished (Pakistan). The Prime Minister of Pakistan was under duress to get back 90,000 PoWS and lost territory from India. Whether he had the mandate to bargain on the Kashmir issue is questionable. The promise for the right of self-determination was given to the people of IOK by the UN. Neither India nor Pakistan have jurisdiction or locus standi to compromise on this issue, and any agreement made without the participation of the genuine leadership of the Kashmiri people should be held null and void. In short the Kashmir issue cannot be used as a bargaining chip for other unresolved matters.

Having stated some of the points which outline the futility of current Indo-Pak negotiations let us get into recent faux pas by Pakistan which has harmed the Kashmir cause and calls for damage control.

It is very disappointing that in response to the changed scenario after 5 August 2019, its Foreign Ministry has not re-evaluated its Kashmir strategy. One would expect the Foreign Minister to plead the case of Kashmiris at important world capitals rather than in gatherings held in Multan or other cities of Pakistan.

One fails to understand if there is some strategy vis-à-vis current developments in IOK. Experts on this topic including diplomats, politicians and journalists in tune with the problem must be approached and both long-term and short-term strateges are developed. Obviously the blueprint (if there was one) of the past has failed and novel and innovative ideas need to be entertained. Overall, a new course of action needs to be adopted.

Pakistan Army has all along been highly supportive and a source of inspiration for the freedom struggle. Let it be reminded people of IOK look upon Pakistani people in general and the Army in particular as their ultimate saviours. The sensibilities of Kashmir should receive top priority before making these statements or participating in any activity.

The recent hoopla about Indian PM Narendra Modi’s letter to Pakistani PM Imran Khan on Pakistan’s Republic Day was upsetting. This is playing to the Indian agenda. To construe this very minor step as a “new beginning” is juvenile.This gesture is a part of Indian machinations to divert world attention from the Kashmir issue and the atrocities they are inflicting on the population.

The picture India wants to portray to the international community is that the impasse has been broken, channels of communication with Pakistan have been opened and in future things will be hunky-dory. Pakistan must never get swayed with the optics of the relationship with India.A well-known Pakistan politician of Pakistan callled Modi’s letter a “ window of opportunity.” As a Kashmiri I see no window but an opaque wall which needs to be dismantled so that the Kashmiri people can see the sunlight and breathe fresh air. Such gestures can be construed as traps laid by India and Pakistan should not take the bait.

Pakistan needs to get over the 1971 War. Though it was highly unfortunate for the Muslims of the Subcontinent, the current situation is different. By indulging in unabated jingoism and sabre rattling India is testing Pakistan’s nerve. Pakistan needs to shed its obsequiousness towards India and stop being defensive. Although India tries to act as a superpower, it seems a pipedream. It is laughable to compare India with China which has emerged as an economic giant posing an existential threat for the USA. The Indian economy is in total disarray and with China breathing down its neck it is highly unlikely to indulge in any military adventurism. Pakistan needs to be unwavering in its stand on Kashmir and unequivocally refuse to yield to any pressure.

Indian machinery is well geared up and to a large extent they have successfully distorted the image of Pakistan. India recruited several agencies in Europe and America and presented the Kashmir issue as the outcome of terrorist activities perpetrated at the behest of Pakistan.  Kashmir issue is screaming and screeching for the media campaign that needs to be launched to spread the voice of innocent Kashmiris who are being subjected to kind of atrocities never witnessed before.

One doesn’t glimpse the suffering or the struggle of Kashmiri people on the streets of Pakistan. There are no billboards or giant posters depicting the Indian monstrosity and subjugation of Kashmir. Such structures should be installed just outside the major airports so that as soon as a tourist arrives it should gain his or her attention and the person should develop a curiosity about the issue. The billboards and posters should be present in front of major landmark buildings and tourist spots.

Indian film industry has produced at least five or six feature films on the Kashmir issue, presenting it as a consequence of Pakistan-sponsored terrorist activities. The movies were lacklustre and portrayals of buffoonery rather than historical facts.  The Information Ministry under Foreign Ministry guidance should seriously consider producing a feature film on real life incidents of Indian atrocities in IOK.  Mass rapes in the village of Kunan-Pushpora could be an excellent topic. A versatile director like Shoaib Mansoor could be an excellent choice. If handled deftly the movie may find space in International film festivals and the Kashmir cause could get world attention like never before.

The Information Ministry and Kashmir committee should hold a yearly painting and news exhibition which depict the sufferings, miseries and enslavement of the IOK population. The event should be highly publicized and serious efforts made to ensure the presence of foreign diplomats and international press. The event should be judged and prizes awarded.