SRINAGAR, Kashmir (RNS) — After midnight, around 2:30 am, with a drum slung over his shoulders and two drumsticks in hand, 35-year-old Fayaz Ahmed Sheikh steps out of his home in his native village of Tahab, 24 miles south of Srinagar in the Pulwama district of southern Kashmir. While everyone else is asleep, he sets out on the deserted, dark streets, covering a distance of about 3 miles on foot for more than an hour.

“Waqt-e-sahar” (“It’s time for Sheri”), he shouts repeatedly in his native Kashmiri language, belting his drum in a synchronized manner to wake up the Muslim residents for their pre-dawn meals.

Locally known as Sahar Khawan, the traditional Ramadan drummers like Sheikh walk miles in the pre-dawn hours of Ramadan mornings, crisscrossing the inner lanes and bylanes and going past houses while beating their drums to wake up the inhabitants. They beat their drums and announce Sehri time for observing Muslims.

Father of three children, Sheikh has been working as a Sahar Khawan for more than two decades. He was 15 when he first began to accompany his father, also a Sahar Khawan, who passed on the mantle to him and his brothers after retiring from the work a decade ago. Now Sheikh and his two brothers are carrying forward the family tradition in their native village.

Although they don’t earn as much out of this work as they did in the past, the brothers want to continue working as night drummers and keep the tradition alive. Before handing over the drum to them, their father had advised them not to quit, even in difficult times. They see a higher calling in doing what they consider noble work. 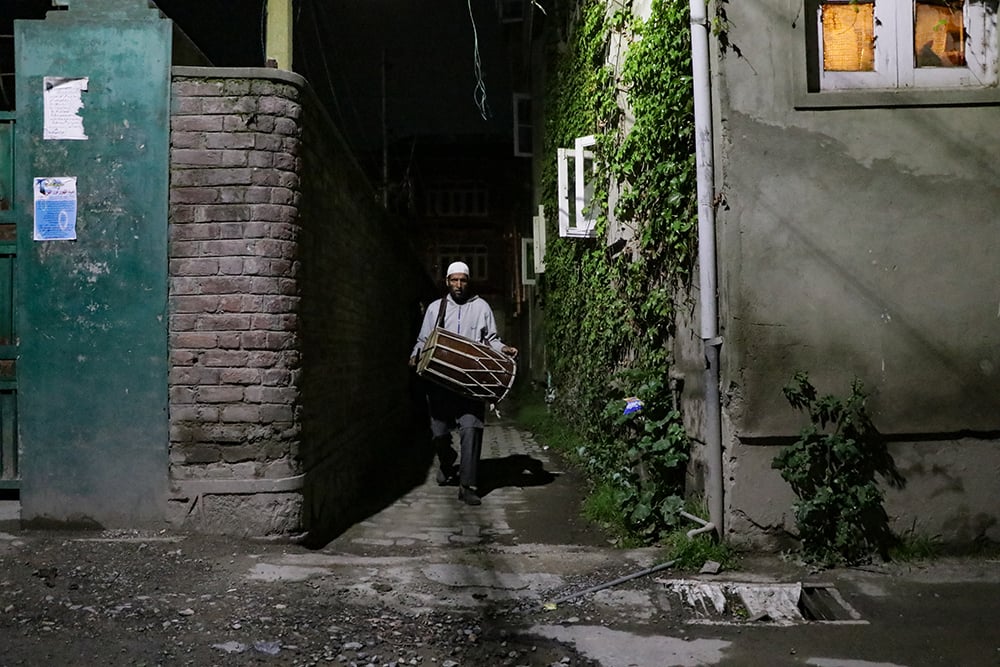 Mohammad Rafiq Katariya shouts “Waqt-e-sahar” (“It’s time for Sheri”) while beating his drum in a housing lane at Zadibal, a residential area in downtown Srinagar, Kashmir, India, on April 30, 2021, during Ramadan. Photo by Adil Abass, a freelance photojournalist based in Srinagar, Kashmir

“We get more sawab (divine reward) in doing this work, and that is what keeps us going,” said Sheikh. “More than a meager amount we earn out of this work from this holy month, its greater reward is with Allah.”

Quality drums cost them 5,000 to 10,000 rupees ($68 to $136). Sheikh and his brothers earn about 5,000 rupees each and collect some rice, which residents give them for their month’s service when they go door to door in the neighborhoods throughout the holy month. Whatever each household gives — from as little as 50 to 100 rupees to a bowl of rice and some old clothes — the brothers take it without asking for more. For the rest of the year, they work as laborers to make a living for their families.

Sheikh, who doesn’t own any inherited land, said changes in the way farmers in southern Kashmir villages use their lands have also affected the drummers’ livelihood. “People have turned their agricultural lands into orchards in our villages here, which are more profitable for them,” he said. “But this means people are not able to give us (as) much rice as we would collect in the past from each household, which would last for several months at our homes.”

Back-to-back lockdowns over the past two years, after the revocation of autonomous status of the region on Aug. 5, 2019, by the Bharatiya Janata Party-ruled Indian government in New Delhi, have had an impact too. The subsequent military lockdown, followed by a months-long lockdown to contain the spread of COVID-19, has hampered the Ramadan drummers’ movement at night. All mosques and shrines, normally abuzz with devotees during Ramadan, are again either closed or witnessing only a few worshippers this year as COVID cases have spiked in the region with the onset of Ramadan.

Increased militarization and night patrols by the Indian army and Central Reserve Police Force bring their own challenges. Since there’s an Indian army camp in their village, Sheikh said, the drummers are required to inform the camp about their night movements and drum beating in the village days before the start of the holy month. Otherwise, he said, they can be prevented from doing their work and stopped from venturing out in the night.

“There have been instances in the past when we were stopped by Indian army and questioned about our movement at night,” Sheikh said. “The troops on night patrol would let us go after we would explain to them about the nature of our work.”

According to historians, Sahar Khawans have been waking up the faithful at Sehri time since the eighth century, when Hazrat Bulbul Shah started preaching Islam in Kashmir. They would also act as night vigil for local residents, keeping a watch on wild animals and announcing any emergency by beating their drums. Mohammad Rafiq Katariya, left, and his colleagues beat their drums to wake Muslims at Sehri time in Alamgari Bazar Chowk, an old residential area in Srinagar, Kashmir, India, on April 30, 2021. Photo by Adil Abass, a freelance photojournalist based in Srinagar, Kashmir

“I remember during my childhood, the month of Ramadan was incomplete without their presence and the noise of their drums. Every neighborhood and village had its own designated Sahar Khawan, who was a revered figure in the community and supported by local mosques and local residents, who would take care of him and also seek his blessings and prayers,” the professor recalled.

“People respected him for working at midnight and doing the noble work of waking up the residents and helping them to observe the fast before dawn,” he added.

Ramzan believes Sahar Khawans will remain forever relevant despite the alarm clocks and smartphones people have come to rely on to wake themselves at Sehri time during Ramadan.

“Sahar Khawans have survived the worst turbulent conflict of 1990s in Kashmir and they continue to survive recent lockdowns and clampdowns,” he said. The idea of a Sahar Khawan, he emphasized, will never die.

“There will always be some young people from their own families and outside who will carry forward this centuries-old Ramadan tradition despite all challenges and difficult times,” he said.

Every year ahead of Ramadan, 65-year-old Mudasir Ahmed Tass from the Kalaroos village in northern Kashmir’s border district of Kupwara rents a room in the Zadibal area of Srinagar city. He has been serving in the area as a Sahar Khawan for more than 30 years. Before him, his father worked in the same area for several decades before passing on the drum to him. 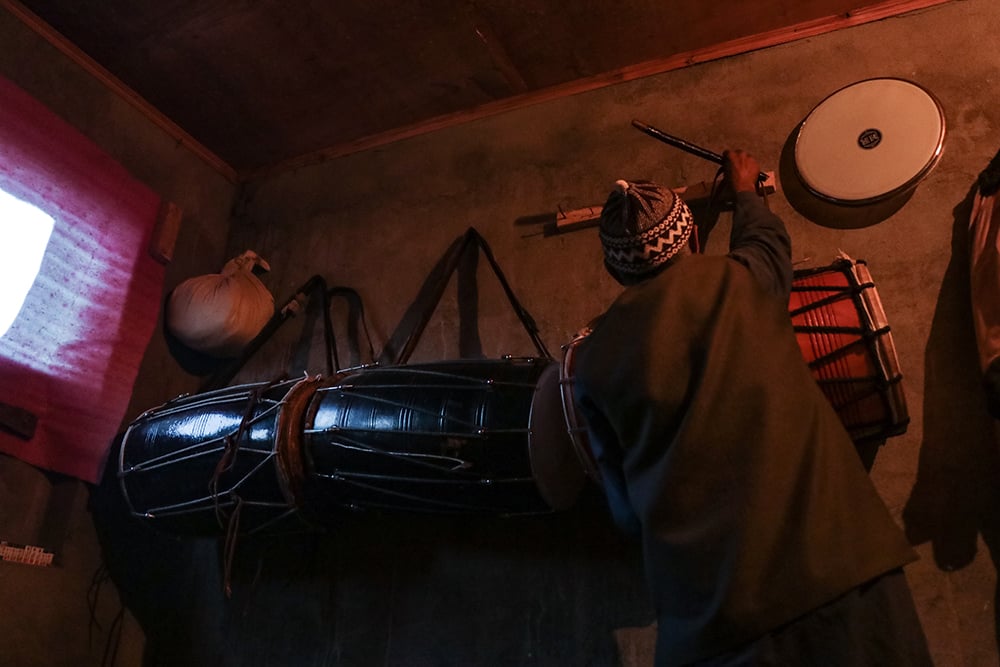 According to Tass, every year about 300 Sahar Khawans from the Kalaroos village, known especially for producing a number of Ramadan drummers, travel to different cities and other districts of the valley before the start of the holy month. They live in rented rooms in their respective areas, where they serve as Sahar Khawans for the whole month. All of them return to the native village just before the Eid festival after collecting some amount and rice from the households in their areas.

Tass said people mostly welcome the Sahar Khawans in their areas, at times calling them and inquiring about their welfare if they’re unable to show up on some nights. However, as earnings from this work have dwindled in recent years, the younger generation is hesitant to learn the craft and take up this work full time, he said.

“The governments here have done nothing for our welfare over the years,” he said. “They could have supported and created a proper source of livelihood for people like us who have been engaged in this traditional work for decades.”

Carrying a torch in one hand and a stick to ward off dogs, the elder Sahar Khawan now accompanies younger drummers on their midnight walks. The younger Sahar Khawans carry the drums and enthusiastically beat them. Tass said he is too old to carry the weight of drums on his shoulders. But he’ll keep coming to the city every Ramadan to wake up the Muslim residents at Sehri time, despite the diminished earnings.

How long will he continue working as a Sahar Khawan, covering the long distances on foot at midnight every Ramadan?

“Jab tak zindagi hai” (“As long as I’m alive”), he replied curtly, a smile on his wrinkled face.