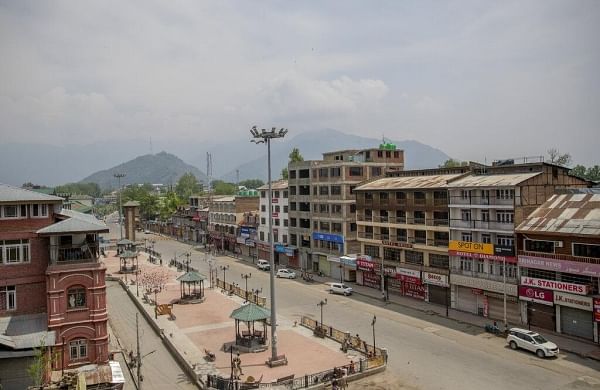 SRINAGAR: A day after several areas in Kashmir witnessed a huge rush of people ahead of Eid festival, curfew-like restrictions were imposed in the valley on Wednesday as authorities enforced the lockdown put in place to contain an alarming surge in coronavirus cases in the union territory, officials said.

Security forces have sealed vital roads and erected barricades at many places in the city and other district headquarters to stop unnecessary movement of people, they said.

Markets are shut and public transport is off the roads.

Movement of only those engaged in essential services and in cases of emergencies is being allowed, they added.

The officials said the restrictions were tightened on Wednesday in the wake of crowds gathering at several places in the city here and many other areas of the valley for Eid shopping.

Massive traffic jams were witnessed on Tuesday at several parts of the city including the commercial hub of Lal Chowk with people thronging the markets.

On April 29, the Jammu and Kashmir administration imposed a curfew in 11 districts in a bid to tackle the surge in COVID-19 cases, which was subsequently extended to all the 20 districts the next day.

The curfew, which was supposed to end at 7 am on May 3, was extended in the twin capitals of Jammu and Srinagar besides Budgam and Baramulla till May 6.

However, the authorities in other districts of the Kashmir valley also ordered extension in the restrictions first till May 6 and then till May 10.

The restrictions were again extended till May 17.

The state recorded 4,352 fresh coronavirus cases on Tuesday, taking the total number of infections to 2,24,898, while record 65 fatalities in the past 24 hours pushed the death toll to 2,847, officials said.

Out of the fresh cases, 1,708 were from the Jammu division and 2,644 from the Kashmir division, they said.

The officials said Srinagar district recorded the highest of 846 cases, followed by 602 in Jammu district and 361 in Baramulla district.

The number of active cases has breached 50,000-mark and reached 50,701 in the Union Territory, while 1,71,350 patients have recovered so far, the officials said.