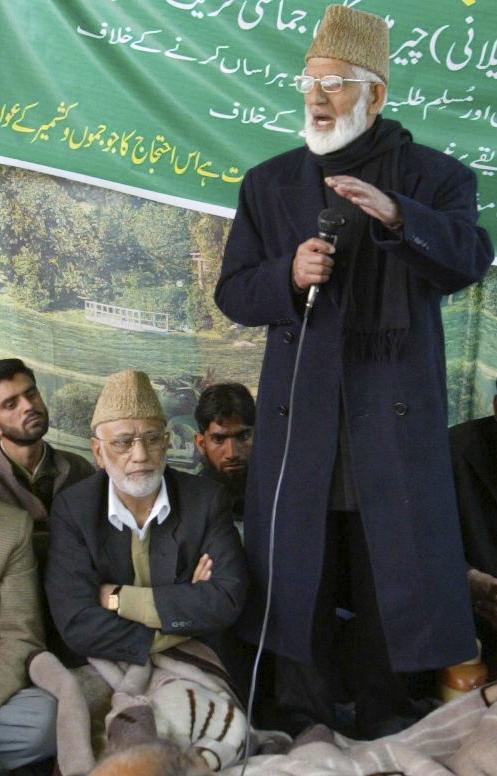 SRINAGAR, India (AP) — A prominent politician in Kashmir who challenged India’s rule over the disputed region for decades died Wednesday while in police custody. He was 78.

Mohammed Ashraf Sehrai was admitted to a government hospital with multiple ailments on Tuesday from a jail in the southern Jammu region, officials and his family said.

Officials did not immediately announce the cause of death.

Sehrai’s son, Mujahid Sehrai, said authorities and doctors told him that his father had tested positive for COVID-19 and that his oxygen levels had dropped early Wednesday.

He said his father was denied proper medical care in jail and complained of ill health when they spoke 10 days ago.

“He told us several times in the last few months during his two phone calls a week to home that he was not getting proper medical treatment,” his son said. “We moved to a court on April 16 with a petition seeking proper medical assistance for him but the court was yet to review it.”

For the past year, political and civic groups have urged the government to release political prisoners from overcrowded jails where coronavirus infection rates are high.

V.K. Singh, the region’s director-general of prisons, said jail officials promptly provided medical help to Sehrai. “He was suffering from multiple ailments and we did whatever we could do as per mandate and resources with the prisons department,” he told The Associated Press.

Sehrai was arrested last July under the Public Safety Act, which allows authorities in Indian-controlled Kashmir to imprison anyone for up to two years without trial.

All Parties Hurriyat Conference, the main separatist grouping in Kashmir, said authorities had left Sehrai unattended in jail until his condition worsened. In a statement, it said it “deeply regrets this inhuman attitude of the authorities and is pained by it.”

It also expressed concern about the health of hundreds of other Kashmiri political detainees as India faces a massive health crisis because of an explosion of coronavirus cases. Last week, the grouping said the prisoners were being denied “even basic amenities,” leading to “serious health problems among the prisoners.”

“Have we become so weak that an old infirm dying person is a threat to the state?” he said in a tweet.

Pakistan’s Foreign Ministry said it was deeply grieved over Sehrai’s death and expressed concern over the health and safety of Kashmiri prisoners.

Sehrai “remained incarcerated in Indian jail under squalid conditions despite serious deterioration of his health and the prevailing COVID-19 crisis,” it said in a statement.

India has arrested thousands of Kashmiris under the Public Safety Act since 1989, when an armed rebellion erupted in Indian-controlled Kashmir seeking the region’s independence or merger with Pakistan, which controls another part of the territory. Rights groups say India has used the law to stifle dissent and circumvent the justice system, undermining accountability, transparency, and respect for human rights.

Sehrai was one of the staunchest supporters of Kashmir’s merger with Pakistan. He was head of Tehreek-e-Hurriyat, an anti-India political group, and a member of the largest religious and political group, Jama’at Islami.

He spent more than 16 years in various Indian jails in a political career that spanned nearly six decades. His son was killed in a gunfight with Indian troops in April last year in the region’s main city of Srinagar. He was member of Kashmir’s main rebel group.

Mohamad Junaid, a New York-based Kashmiri political anthropologist, said “there is no difference between killing and actively creating the conditions of someone’s death.” In a tweet he said, “When a state can’t take care of its own people, how could it ever look after the health of political dissidents it has declared as enemies and imprisoned?”

Sehrai is survived by his wife, two daughters and three sons.