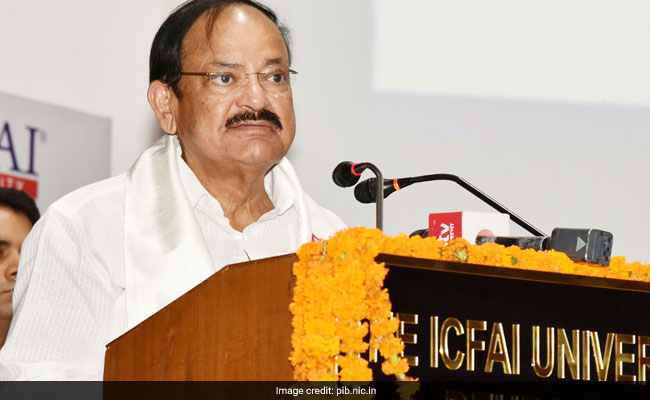 The world is looking towards India, we are being respected worldwide, the Vice President said. (File)

Jammu and Kashmir is an integral part of India, and the country is capable of solving its own problems, Vice President M Venkaiah Naidu said today, asking other nations to “confine themselves to their domestic problems” rather than giving unsolicited advice to India.

On his first Jammu and Kashmir visit since the August 2019 abrogation of Article 370, he said, without naming any country or individual, some people from the neighbourhood always try to create problems and disturbances because they do not want India to progress.

“My advice to some friends who are trying to give unasked advice to us in between and make commentaries to confine themselves to their domestic problems. We are capable of taking care of our own problems and they need not worry about us,” he said, addressing the 3rd and the 4th annual convocation of the Indian Institute of Management (IIM).

The convocation for two batches were held together as the third was postponed due to the coronavirus pandemic.

“My dear youngsters, where you are studying is an integral part of India,” the vice president told the students. “And we are of the opinion we are capable of solving our problems. No country for that matter has any business to interfere or make comments on the internal affairs of another country or any other country.”

In his nearly half-an-hour speech, he said, “We all believe in democracy and civilization. If you are really civilised you are not expected to interfere in the affairs of any other country. I am very clear about it.”

He said this part of the country is very beautiful and so are the people who need to have peace.

“Peace is the prerequisite for progress. If you have tension, you cannot pay attention. This has to be understood by one and all. That is why peace is very much required,” he said.

The vice president said some people from the neighbourhood always try to create problems and disturbances for India.

“We should not allow them to succeed. We should be guided by the spirit of national integration – nation first, party and profession next and self last. That should be our attitude, nation first attitude irrespective of caste, creed, sex, religion and region,” he said.

He added, “We are all Indians – we may belong to Jammu, Kashmir, south or north. We must remember that we are all sons of this country and we should feel proud that we are Indians.

He said India is the most favourite destination for investment. “With the ease of doing business, the reforms brought in by the Prime Minister and the new ideas, the world is looking towards us and we have the potential to take advantage of that. See to it that we become a strong, stable, peaceful and prosperous nation,” he told the students.